Arch of Titus in Münster, Germany

A portion of the Yeshiva University Museum exhibition “The Arch of Titus – from Jerusalem to Rome, and Back,” was recently on display at the Archäologisches Museum der Westfälischen Wilhelms Universität Münster, Germany. A life-size replica of a frieze in the Arch showing a menorah being carried back to Rome from the sack of Jerusalem in 70 C.E. was included in “Eirene – Pax. Peace in Antiquity,” an exhibition of artifacts representing peace from the time of the oldest peace treaty in the world, signed in 1259 B.C.E. between Egypt and the Hittites, to the turmoil of the Roman empire in the third century C.E. 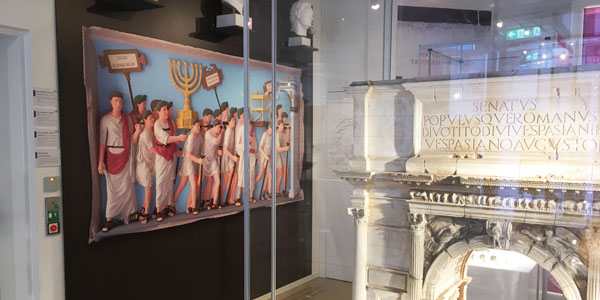 The Arch of Titus exhibition was first presented in September 2017 at the Yeshiva University Museum by the Yeshiva University Center for Israel Studies. The show explored the historical and cultural significance of the Arch from its creation as a monument to the Roman triumph over the Jews in 70 C.E. through the medieval papacy and early modern rabbis, the Counter-Reformation, European Classicism and finally the Jewish and Israeli national re-appropriation of the Arch.

Dr. Stephen Fine, Dean Pinkhos Churgin Professor of Jewish History and director of the Center for Israel Studies, said that “it was great to see Titus on display so prominently, and especially in Germany, and gratifying to hold a symposium with dedicated colleagues and deliver a public lecture.”