Perelis Lectures and Writes on the Sephardic Community 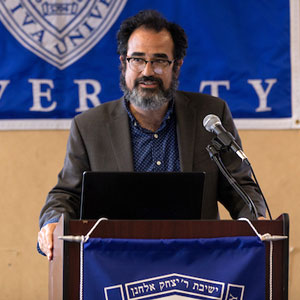 This past August, he presented at two academic forums in Mexico while he was in the country to continue his research into the rediscovered manuscripts of Luis de Carvajal, which comprise the religious writings of a 16th-century secret Jew in colonial Mexico. 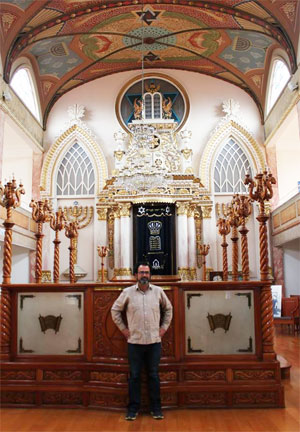 On August 9, Dr. Perelis visited a restored Ashkenazi synagogue in Mexico City’s historic center known as “La Sinagoga Justo Sierra” at the invitation of director Monica Unikel. “The Jews who lovingly built this synagogue in the 1940s left the neighborhood long ago,” said Dr. Perelis. “But many Jews still have their stores in the area, and there is a kosher restaurant providing delicious food, a mixture of Mexican and Syrian standards.”

The restoration efforts have both preserved the historical significance of this synagogue and placed it within the network of other important buildings in the area dating back to colonial times. It now has a new life as a space for cultural events and classes, and community building. “It is a great example of how something so local can become a conduit for a more global encounter and how the past can anchor us as we navigate the future.”

On his last day in Mexico City, Dr. Perelis gave a class on the history of the Jews of Mexico during the colonial period to members of Rabbi Marcos Meta’s Torah study program, Torá VaDaat, that is part of the Monte Sinaí Syrian Jewish Community. “I am very excited to share my research with members of Mexico City’s vibrant Jewish community because I believe that Carvajal’s story speaks to contemporary religious concerns. In particular, Carvajal holds a special place in the imagination of local Jews who see him as a forerunner of their own, and very different, Mexican-Jewish life.”

Dr. Perelis added that “this trip to Mexico inaugurates the Diasporas Project at the Schneier Program in International Relations. The Schneier program will sponsor cultural events, scholarly conferences and student research and service programs exploring the complex realities of life in a global age.”

The following week, he presented at Fordham University as part of the Early Modern Workshop’s annual conference. He spoke about the “Inquisitorial Prison as a site of Cross-Cultural Encounter: the Case of Manuel Cardoso de Macedo aka Abraham Pelengrino Guer.”

Other recent accomplishments include an article in iMex Revista, edited by Jacobo Sefamí and Matthias Lehman, titled “Reimagining the Sagrada Familia: Family and Faith in the life of Luis de Carvajal, e Mozo (Mexico, 1590’s),” and an article in Religious Changes and Cultural Transformations in the Early Modern Western Sephardic Communities (edited by Yosef Kaplan, Brill, forthcoming 2018) titled “Prison Revelations and Jailhouse Encounters: Inquisitorial prisons as places of Judaizing activism and cross-cultural exchange.”