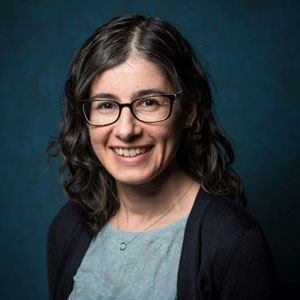 Dr. Josefa Steinhauer, associate professor of biology at Yeshiva College, has been awarded a three-year $375,000 R15 Academic Research Enhancement Award (AREA) from The Eunice Kennedy Shriver National Institute of Child Health and Human Development, one of the National Institutes of Health in the United States Department of Health and Human Services.

Dr. Steinhauer received the award to study “Calcium-Independent Phospholipase A2 in Drosophila.” As she points out, Drosophila melanogaster, commonly known as the fruit fly, has been studied in genetic research laboratories for almost a century. Because the fly has a short lifespan, a simple genome and is easily made to reproduce in captivity, it is a prime candidate for genetic research.

“Phospholipids are important molecular constituents of cells, composing the bulk of plasma and intracellular membranes,” she explains. “They also can be metabolized into signaling molecules, which can change the behavior of the cells in which they originate and in neighboring cells. Compared to other biological molecules like proteins and nucleic acids, we know less about how phospholipid metabolism affects the physiology of an organism. This will be focus of my research.”

Her lab has created a novel mutation in the phospholipid metabolizing enzyme iPLA2-beta in fruit flies. This new mutation displayed reduced female fertility and a severely reduced lifespan. Through sophisticated genetic tools available only in flies, iPLA2-beta function was localized to the nervous system. “Because iPLA2-beta is a disease gene in humans for a variety of neurodegenerative disorders,” she points out, “including Infantile Neuroaxonal Dystrophy, Neurodegeneration with Brain Iron Accumulation, and Parkinson’s disease, the fly’s system will be used to better understand the mechanism of neurodegeneration in animals and people lacking iPLA2-beta. Our studies will also examine the roles of iPLA2-beta in female fertility.”