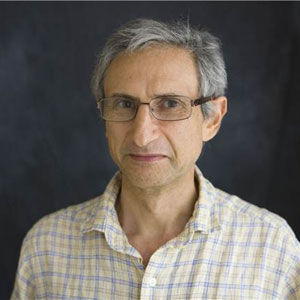 Dr. Mark Edelman, clinical associate professor at Stern College for Women, has had a successful year, co-editing a book and helping organize an international conference.

Chaotic, Fractional, and Complex Dynamics: New Insights and Perspectives is part of a series, “Understanding Complex Systems,” published by Springer. It was co-edited by Dr. Edelman; Dr. Elbert Macau, professor at the Brazilian National Institute for Space Research and Sao Paulo Federal University; and Dr. Miguel Sanjuan, professor of physics at the Universidad Rey Juan Carlos in Madrid, Spain. “Among the three co-editors, I organized the part on fractional dynamics; I also contributed an essay to the book, ‘Universality in systems with power-law memory and fractional dynamics’.”

“I became interested in the general properties of fractional dynamic systems while working with Dr. George Zaslavsky at the Courant Institute of Mathematical Sciences at New York University,” Dr. Edelman recalls. (Dr. Zaslavsky passed away in 2008.) “Fractional systems have many interesting properties, especially connected to power-law memory, and research in these systems has practical applications to functions as diverse as finance, socioeconomics, physiology and molecular biology.”

Dr. Edelman was also a member of the organizing committee and an invited speaker at the 7th International Conference on Nonlinear Science and Complexity, held August 14-17, 2018, at San Luis Potosi, Mexico. The conference was in memory of Valentin Afraimovich, a leading expert in nonlinear science and complexity who died in February 2018.

“I got acquainted with Valentin Afraimovich at the Courant Institute where he used to be a frequent guest. We discussed various aspects of research in nonlinear dynamics and dynamics with memory. In February 2012, I invited him to Yeshiva University, and he gave a colloquium talk. He was simply a charming person.”