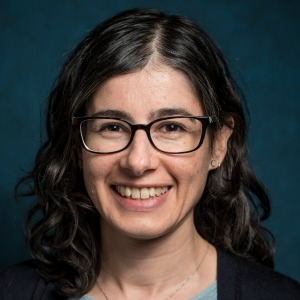 Dr. Steinhauer explains “Combover interacts with the axonemal component Rsp3 and is required for Drosophila sperm individualization” this way: “During the development of sperm cells,” she explained, “individual sperm need to be separated from their sister sperm cells and stripped of their cytoplasm to form streamlined, free-swimming functional gametes. In this report, we identified a mutation in fruit flies (Drosophila melanogaster) that disrupts a gene called Combover responsible for this process of separation. Combover was already known to act with a specific suite of proteins during wing development (the Planar Cell Polarity proteins), but surprisingly, in sperm development it appears independent of this pathway. Thus, we identified a new pathway for Combover function in sperm development.”

The three Yeshiva College students became interested in scientific research through her classes. “They approached me for the opportunity to do research in my lab under my supervision, and the rest is history! Benny and Jacob both wrote honors theses on their work in my lab.”

Dr. Steinhauer’s overall research program “started out examining the roles of phospholipid molecules in sperm development. This project grew out of a collaboration with the lab of Dr. Andreas Jenny at Albert Einstein College of Medicine.” Dr. Jenny’s lab had previously characterized Combover’s role in wing development, but when they noticed the mutant flies were male sterile, “they asked us to help them elucidate its role in male fertility. Our unpublished data suggest that Combover not only helps the individualization machinery track along the sperm tails but also helps pull the cell membranes around the individualizing sperm, which involves a connection with the phospholipids (the main molecular components of cell membranes).”