Dr. Joshua Waxman Does Not Wane in his Work 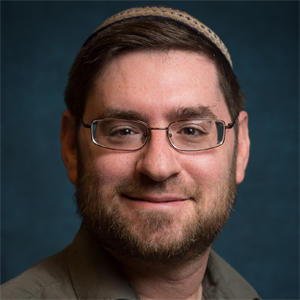 In his presentation, Dr. Waxman noted that “with the rise of the Internet, it has been pointed out that the Babylonian Talmud, with layers of texts commenting and referring to other texts, was an ancient hyper-text. Now, with the rise of social media, we can start to think of the Talmud as an ancient social network…and we set out to create a social network graph of the Babylonian Talmud.” Using Named Entity Recognition of a statement-aligned Aramaic/English bitext, “we found nodes (rabbis) and edges (scholastic interactions, such as citation). We induced formal scholastic relationships from these interactions, and propagated biographical information across the graph. We highlighted rabbis in the Talmudic text, using color to indicate scholastic generation, and displayed relevant subgraphs to show how the participants on a folio relate to one another both locally and globally.”

Dr. Waxman believes that “this biographical and scholastic information can aid a student of Talmud in understanding the dynamics of the discourse and why specific rabbis say what they say. For instance, the modern Revadim approach to Talmud study makes great use of which generation a Tanna or Amora lived, which academy he belonged to, and so on.”

In February 2019, Dr. Waxman contributed to a YU Ideas symposium on “The Future of the Book,” in which he described some of the early stages of this work. “But there have been various advances in the system,” he explained. “We now have coverage of the entire Babylonian Talmud; we segment the text and associated scholastic graphs not just into pages but into sugyot [topical passages]; we are exploring co-occurrence of scholars in various sugyot to find further relationships; and are experimenting with algorithmic methods of scholar disambiguation, because the same name can refer to different people who lived in different times (such as five different people named Rav Kahana, two people named Ravina, and so on). I’m hoping to publish something about these algorithms/advanced some time in the future.”

YU students assisted Dr. Waxman in the development of this system. Shayna Fishman ’18S worked to put together the first version of the system, first as funded summer research, then continuing on as her honors thesis under Dr. Waxman’s mentorship. Subsequently, Shira Smith ’19S worked on the project as her honors thesis, looking at the co-occurrences within sugyot to try to figure out scholastic relationships.

Dr. Waxman’s current research is centered on natural language processing, digital humanities and social network graphs. “It also has a Torah UMadda orientation,” he noted, “where several projects try to develop or harness algorithms to discover things about Jewish texts.”

He just returned from the ISCOL (Israeli Seminar on Computational Linguistics) 2019, held on September 11, 2019, in Haifa, Israel, where four submissions had been accepted for poster presentations: 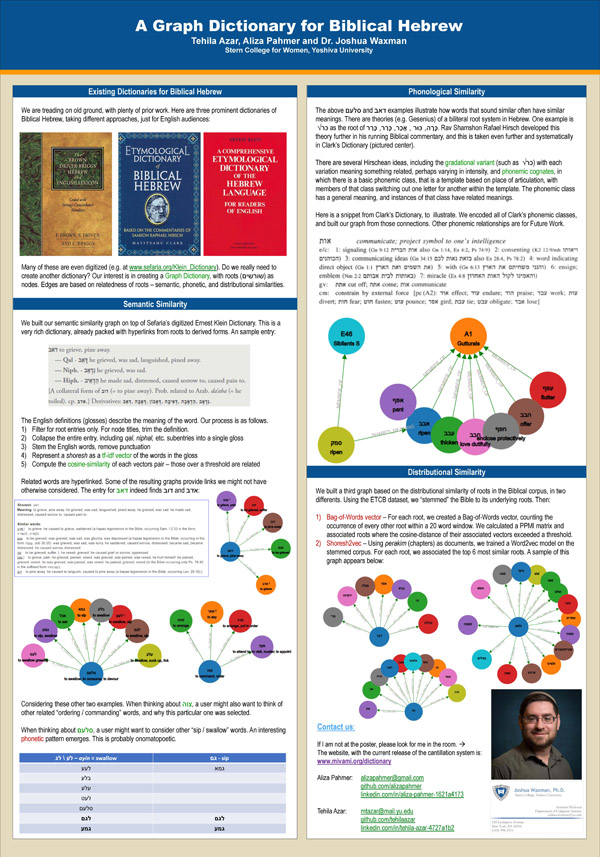 Adina Cohen ’19S and Joshua Waxman – NER of Citations and Fine-Grained Classification of Responsa
We looked at rabbinic responsa [she’elot uteshuvot] and tried to classify their topic based on the Hebrew/Aramaic words that appear as well as based on the citations of earlier sources that occur. This was Adina’s Cohen’s honors thesis, which Dr. Waxman mentored, and Adina, who has recently made aliyah, was at the conference to present her poster. 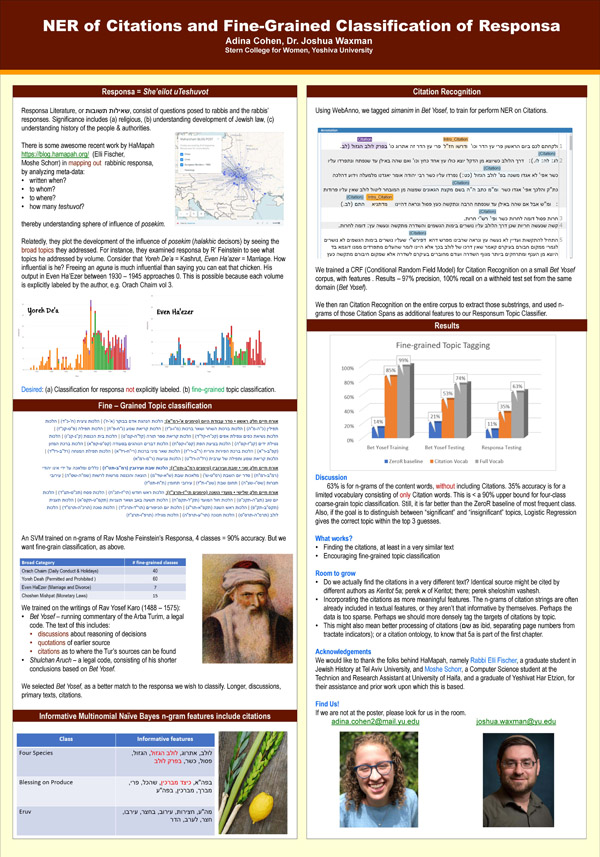 Joshua Waxman – A System to Generate Probabilistic Prosodic Trees
This is a system to interpret and make meaningful the cantillation of the Bible. Besides being musical notation, the cantillation actually describes a binary prosodic tree. There is a website for this. 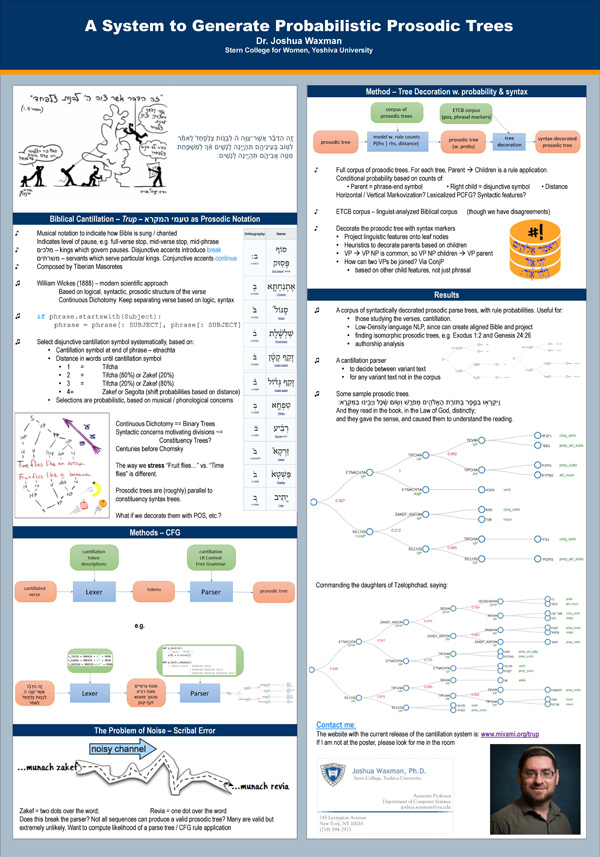 Racheli Moskowitz ’19S and Joshua Waxman – Leitwort Detection and Quantification
A Leitwort [leading word], known in Hebrew as Milah Mancha and quite popular at Yeshivat Har Etzion, is a word or phrase repeated, often 3 or 7 times, densely in a passage. This work systematically finds such Leitworts and quantifies their significance. This was Racheli Moskowitz’s honor’s thesis, which Dr. Waxman mentored. 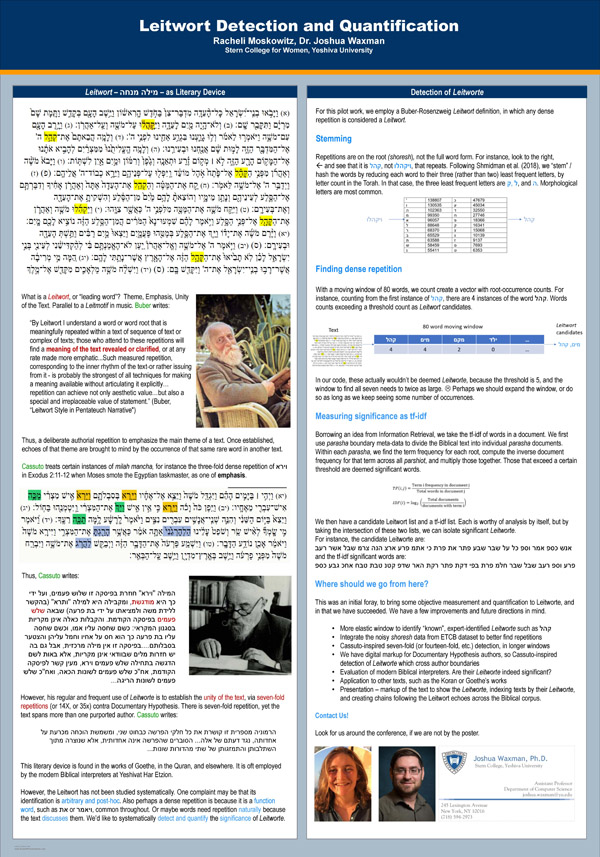