Her business and research expertise focuses on how nostalgia affects consumer attitudes, behaviors, and choices across varying contexts, such as politics and health. She also examines the motivation for money, product choice, and hedonic consumption.

Her research has been published in Journal of Consumer Research, Journal of Marketing Research, Personality and Social Psychology Bulletin, and Food and Quality Preference, and has been featured in multiple media outlets such as BBC, CNN, Fortune, Huffington Post, NBC’s Today Show and Fast Company. She recently was quoted in Harper’s Bazaar about the reunion of the Jonas Brothers.

The interview with YU News has been edited for length and content. 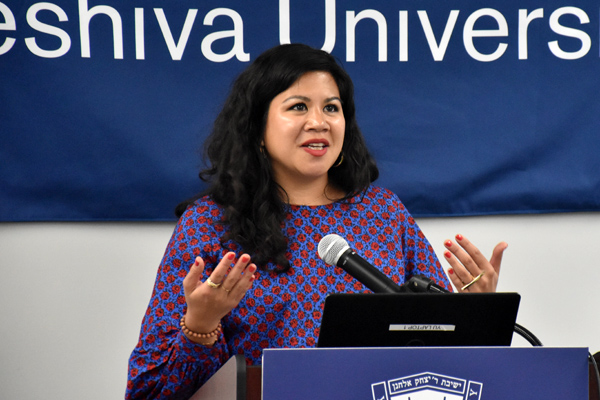 Your undergraduate and master’s degrees are in psychology, but your PhD is in business administration. How did you make the transition between disciplines?
It happened pretty seamlessly. I have always liked psychology because I’ve always wondered why people did what they did, and the study of consumer behavior is a blend of psychology and business. During my master’s degree, I worked as a research assistant in the business school conducting research, and when I went for my PhD, I studied business administration with a focus on marketing and consumer behavior.

Why a focus on nostalgia in your work?
I’ve always had an appreciation for retro aesthetics. I did my PhD work in Minnesota, home of General Mills, and every so often they’d bring out retro packaging for their cereals and other products, and I’d wonder why the packaging was so popular, which made me think about the experience of nostalgia. In my work, I conceptualize nostalgia as a primarily positive mixed emotion, with elements of both sadness and joy in it. I think it’s a net positive emotion; as I see it, nostalgia is what I would call a sentimental longing for a personally experienced past.

Explain that a little more.
The research in nostalgia in the past 10 to 15 years shows that when people feel this emotion, it has positive benefits for their well-being. When they think of nostalgic events, they think of events where they’re surrounded by close significant others, and it also increases their sense of social connectedness and self-esteem along with a sense of self-continuity, with strong links between the past and the present.

From your research, nostalgia seems also to weaken the desire for money and increase the harshness of moral judgments.
Money gives us access to goods and services and allows us to feel independent. But we can also access these goods and services in other ways, for instance, through help from friends and family. For instance, when I was in college and needed to move, I would call upon my friends to help. Now, I can pay for that service with my own money, but that also means I no longer have to rely on social support from others in this case. My hypothesis is that people feeling nostalgic desire money less because they believe that, in general, their needs and wants can be satisfied by the help of others and not through money.

In terms of studying how nostalgia affects judgments people have about those who commit moral violations of some sort—and it’s important to know that this kind of study is in its preliminary stages—we find that while we might expect judgments not to be harsh because nostalgia is seen as a positive emotion (for instance, nostalgic people seem to be less prejudiced and more welcoming of people from stigmatized groups), my guess is that when people are nostalgic, social bonds are so important that when someone violates them, the people judge the violators more harshly.

How have you found your experience at Yeshiva University?
It’s been good, and I’ve been happy. My students have been great—I find every one of them respectful and open to learning, and they will put in the effort as long as I put in the effort as well. Our new dean, Dr. Noam Wasserman, has been putting forth all sorts of exciting new initiatives that will increase the quality of our teaching and promote our work in the media.

I have to ask you about the mention of “hip hop music director” in your faculty bio.
I love hip hop, I’ve always loved hip hop growing up, and in 1998, the radio station at the University of British Columbia wanted to run an all-female hip hop radio show, and I said, ‘Sure, why not?’” It ran on Thursday from 3 p.m to 5 p.m., a prime spot. It was kind of a big deal because there were no urban stations where people could hear A Tribe Called Quest or Wu-Tang Clan or any hip hop at all. We ran it until I left, around 2003, and the radio show is still going, though it’s morphed into something else.

How did you cultivate a love of hip hop in a place that didn’t have much of it?
I grew up in Calgary, and I watched television shows like “Rap City” on MuchMusic, and in Vancouver, there were record stores—and then the internet came! I’ve lived in many places before New York, and, for me, music has always been something that’s been able to connect people, and for some reason, wherever I’ve traveled, I always meet someone who knew somebody else just through the music.