Dr. Lisa Chalik is an assistant professor of psychology at Stern College for Women. She received both her master’s degree and doctorate from New York University and her bachelor’s degree from Rutgers University. She is the director of the Developing Minds Lab at Stern College, where her research focuses on the theories that children build and rely upon as they navigate the social world. She explores how children learn to organize the people around them into social categories and how they make inferences about people based on social category membership. She also studies the implications of social categorization for moral evaluation.

The interview with YU News has been edited for length and content. 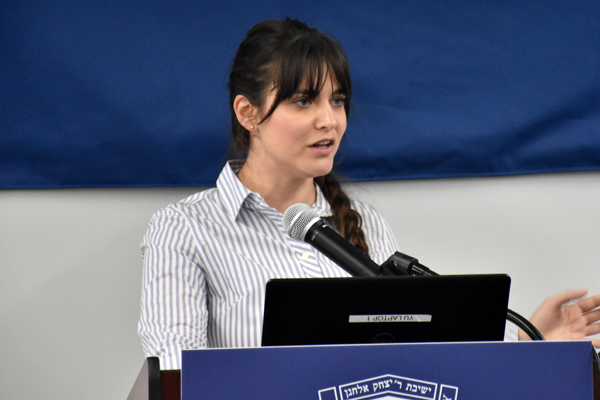 Have you always had an interesting in psychology?
As an undergrad at Rutgers, I majored in psychology because I thought it was interesting, and I just never stopped. I found myself applying to graduate schools, found an adviser whom I really wanted to work with at New York University, did a post-doc at Yale with two amazing professors and then started applying for jobs.

How have you found being at YU?
I love the students. They’re phenomenal, and working with them has been the best part of the job. I am also Orthodox, and coming in to an Orthodox Jewish institution, I assumed I was going to be meeting one kind of person. But I’m surprised by the diversity of voices and perspectives in the students, which has made it very interesting to interact with them about psychology and all sorts of other things. There is more religious diversity than I expected as well as just general outlooks on the world.

What was the genesis of the Developing Minds Lab?
I’m trained as a researcher, and when I came to interview for my position, it was with the understanding that I would be both teaching and doing research. The dean and members of the psychology department wanted an increased focus on research to help students acquire the experience they needed to go to graduate school in psychology. There was this opportunity, then, for us to create this research lab on campus.

It’s good for me because I get to continue doing the research I love and for the students because they get to work with me and get research experience. I’ve had about 12 students come through the Lab so far. They’re participating in every part of the research process, from reading the literature and discussing it to coming up with interesting research questions and ways to test those questions. They help me both design and run the studies. We have a field site at the Liberty Science Center in Jersey City [New Jersey], where three or four students go there once a week to interact with the families. They collect the data for the studies that we’re running but also just interact with people and teach people about psychological science in general.

This summer, we were also collecting data in Central Park. We set up a station in random spots in the park to do the same thing: interact with families, collect data and teach people about science and psychology and then, later, analyze the data together. It worked really well and was a lot of fun. The Lab has only been in operation for a little over a year, but soon, we’ll start publishing the data that we’ve collected.

How has the response been from students about the Lab?
The response from the students has been really positive. In fact, I’ve had to turn down a few students who wanted to join the Lab just so that I can manage the ones I have. A group of them have told me that they thought research would be boring, but they’ve found that it’s actually really interesting! It’s also a good opportunity for those who want to go to grad school in psychology to start honing their interests, and they’ve told me that they now feel much more prepared to move forward.

You describe the focus of your research as being about children and the “social world.” How do you define that term?
It’s true that there are many, many ways, especially with technology, that you could define a social world. What we’re looking at, on a very basic level, is what do children think it means to be part of a social group. So, if you learn that somebody’s a member of a certain group, what sorts of inferences do you make about them? If you know that two people are members of the same group, do you expect them to have a certain sort of relationship with each other? Are there certain ways that you expect people to act towards in-group and out-group members?

The studies we do are designed to feel like games. We will tell them a little story and ask them to predict what they think is going to happen next, or to explain why something happened, or to say whom they liked best in the story. So, it’s always very simple, because we always want to be able to test what children think about the world regardless of their verbal abilities. Any pre-school child should have the requisite abilities to interact with us.

The age range that we work with—between the ages of three and 10—seems to be a really important time when children develop beliefs about social groups. So, we see also sorts of interesting changes, depending on the children’s cultural communities, their backgrounds, what sort of schools they go to, with whom they spend their time. There are all sorts of differences in how children choose to divide up the social world, in what they notice and think are meaningful as well as the behavioral expectations that children have about how people are going to act with each other and how people are supposed to act toward each other.

What’s on the horizon for you?
I was given a start-up grant for the first three years, and I’m also now starting to write grants to support the Lab. There will be parts of the grant with which students can help, and they’re definitely helping me write papers and do conference presentations. With more funding secured, I can expand operations so that we can do more research, and students can begin the process of publishing their research.

When I was applying for jobs, of course I wanted to become a psychology professor. But being a professor at Stern College has this whole extra added appeal because I have the sense that I’m contributing to the Jewish community, which is very rewarding to me.