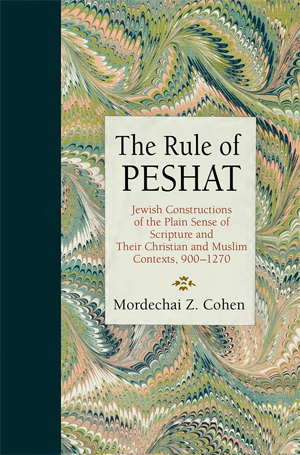 Dr. Mordechai Cohen, professor of Bible, associate dean of the Bernard Revel School of Jewish Studies and divisional coordinator of academic Jewish studies, has published a new book: The Rule of Peshat: Jewish Constructions of the Plain Sense of Scripture and Their Christian and Muslim Contexts, 900–1270 (University of Pennsylvania Press).

Within the rich tradition of Jewish biblical interpretation, few concepts are as vital as peshat, often rendered as the “plain sense” of Scripture. Generally contrasted with midrash—the creative and at times fanciful mode of reading put forth by the rabbis of Late Antiquity—peshat came to connote the systematic, philological-contextual, and historically sensitive analysis of the Hebrew Bible, coupled with an appreciation of the text’s literary quality. In The Rule of Peshat, Mordechai Z. Cohen explores the historical, geographical, and theoretical underpinnings of peshat as it emerged between 900 and 1270.

Adopting a comparative approach that explores Jewish interactions with Muslim and Christian learning, Cohen sheds new light on the key turns in the vibrant medieval tradition of Jewish Bible interpretation. Beginning in the tenth century, Jews in the Middle East drew upon Arabic linguistics and Qur’anic study to open new avenues of philological-literary exegesis. This Judeo-Arabic school later moved westward, flourishing in al-Andalus in the eleventh century. At the same time, a revolutionary peshat school was pioneered in northern France by the Ashkenazic scholar Rashi and his circle of students, whose methods are illuminated by contemporaneous trends in Latinate learning in the Cathedral Schools of France. Cohen goes on to explore the heretofore little-known Byzantine Jewish exegetical tradition, basing his examination on recently discovered eleventh-century commentaries and their offshoots in southern Italy in the twelfth century. Lastly, this study focuses on three pivotal figures who represent the culmination of the medieval Jewish exegetical tradition: Abraham Ibn Ezra, Moses Maimonides, and Moses Nahmanides. Cohen weaves together disparate Jewish disciplines and external cultural influences through chapters that trace the increasing force acquired by the peshat model until it could be characterized, finally, as the “rule of peshat”: the central, defining feature of Jewish hermeneutics into the modern period.