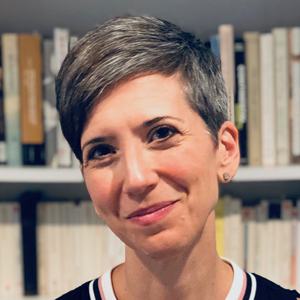 Dr. Rachel Mesch, professor of English and French and chair of the English Department at Yeshiva College, has not let the pandemic slow down her academic projects.

Her most recent book, Before Trans: Three Gender Stories From Nineteenth-Century France (published this year by Stanford University Press), is one of six finalists for the American Library in Paris Book Prize, which will be awarded in a virtual ceremony on Jan. 14. (The other finalists are Bill Buford, Dirt: Adventures in Lyon as a Chef in Training, Father, and Sleuth Looking for the Secret of French Cooking (Alfred A. Knopf US / Jonathan Cape UK); James Gardner, The Louvre: The Many Lives of the World’s Most Famous Museum  (Atlantic Monthly Press); Caitlin Horrocks, The Vexations: A Novel (Little, Brown and Company); Maggie Paxson, The Plateau (Riverhead Books); and Maurice Samuels, The Betrayal of the Duchess: The Scandal That Unmade the Bourbon Monarchy and Made France Modern (Basic Books).) Dr. Mesch will deliver a virtual talk at the American Library on Jan. 12.

She has also done extensive promotion of Before Trans. Among the many venues where she has spoken are the Cambridge (UK) 19th-Century French Seminar; Pamela Druckerman’s Pandemonium U; the France-Stanford Center for Interdisciplinary Studies at Stanford University; and the Nineteenth-Century French Studies Association. She also recorded two podcasts about the book for New Books in French Studies and the French History Podcast.

With two colleagues, Dr. Masha Belenky (George Washington University) and Dr. Susan McCready (the University of Alabama), Dr. Mesch created a virtual book series for the Nineteenth-Century French Studies Association (NCFS). Called NCFS in Captivity, it presented five events in the fall, with between 100-200 participants each time, with six more scheduled for the spring. Recordings of the events are posted on H-France Salon, described as “a multimedia journal of French Studies in its broadest sense, encompassing history, literature, cinema, art history, theory, and culture.”