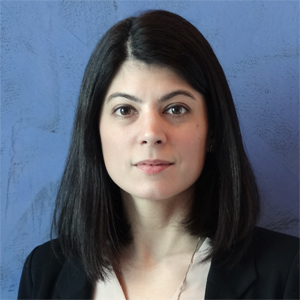 Dr. Ana Ortin Peralta, assistant professor in the PsyD in School-Clinical Child Psychology Program at the Ferkauf Graduate School of Psychology, recently received a $7,500 grant as part of The Society for Research in Child Development 2021 Small Grants Program for Early Career Scholars.

As it states on its website, “the Society for Research in Child Development recognizes the importance of capacity building for early career scholars seeking to establish their research programs, especially considering the limited funding available for conducting exploratory work and particularly during the COVID-19 pandemic. The Small Grants Program for Early Career Scholars addresses this need within developmental science by supporting pilot or small-scale research projects proposed by members who completed their doctoral degree within the last five years.”

The grant will support Dr. Ortin Peralta’s research on identifying sensitive periods and developmental risk factors for suicidal behavior to address the challenge of assessing suicide risk in children. The 2021 Small Grant for Early Career Scholars will support a mixed-method, multi-informant study to advance our understanding of the interplay between the acquisition of the concept of death, exposure to adversities, and suicide ideation among Black and Hispanic/Latino children. This study is embedded within a large multi-method research project that examines the nature of suicide ideation and its warning signs among children of color.

How did you happen to be selected for the grant?

In recent years, there has been an increase in the number of deaths by suicide among children, particularly among Black children. However, very few studies to date have focused on understanding the nature of their suicidal ideation and warning signs. Addressing this gap in the literature has become one of The National Institute of Mental Health’s highest priorities for the coming years. The Society for Research in Child Development (SRCD) Review Committee was likely aware of this need and decided to fund a study that aims to generate new information on the content of suicidal ideation and related risk factors to improve the assessment of suicide risk in children of color.

Could you talk a bit about the study itself and what inspired you to do it?

The study uses a mixed methods approach to examine the content of suicidal ideation and the role of the acquisition of the concept of death among children of color. Since 2012, I have been working on several studies involving the recruitment of adolescents from local emergency departments. While recruiting those teens, we occasionally identified children who were admitted to the hospital because they were thinking about suicide or they had attempted suicide.

From the beginning, I was struck by the question: What could be happening in the life of these children who are thinking about suicide at a such young age? I thought that one day I would devote my research to helping these children successfully navigate through their crises.

The most common approach in studying suicide risk in childhood has been to apply what we have learned from White adolescent samples to children. This quantitative approach, although useful as a starting point, lacks developmental and cultural perspectives and overlooks the cognitive and emotional processes that characterize childhood and may affect the way children think about suicide. As such, we need a ground-zero approach that considers the uniqueness of their developmental stage in order to generate novel information about the phenomenology of suicidal behavior in children and their unique risk factors.

Although this study reopened the debate about the role of the death concept and suicide risk, it only included 3-7-year-olds and lacked diversity, and suicidal ideation was reported by parents, who are mostly unaware of their child’s inner thoughts.

Furthermore, children with an advanced understanding of death have been exposed to more adversities (e.g., illness, violence, death) and more frequently report thoughts about suicide. Examining how the acquisition of the concept of death influences thoughts of suicide has the potential to advance our knowledge on the nature of suicidal ideation among children and inform suicide risk assessment.

How will you conduct a “mixed methods study”?

In a mixed methods study, there is both a qualitative and a quantitative component. We will recruit children from Latino and Black backgrounds who are currently thinking about suicide or have attempted suicide recently, matched children without history of suicidal behavior, and their parents or caretakers from different psychiatric settings in the Bronx.

Finally, children and parents/caretakers will complete a series of self-report questionnaires examining factors that may impact how children acquire the concept of death, such as early adverse experiences or religious beliefs.

How do you plan to use the findings of your study?

The qualitative data will be transcribed and coded for publication in a peer-reviewed journal. The qualitative and quantitative information collected from this study will serve as pilot data to apply for larger grants to scale up this project, recruit a larger sample of families, and follow them up over time.

Do you have other research projects in mind?

Another key milestone in childhood is the development of emotion regulation skills. One of the main sources to learn these skills is parents or main caregivers, how they regulate their emotions and help the children regulate theirs. Emotion dysregulation has been identified as an important risk factor for suicidal behavior in adolescents and is one of the promising areas of exploration in children. With these ideas in mind, our team plans to add an economical momentary assessment (EMA) component to the study and collect daily measures on parent-child conflict, their emotional responses and the emotion regulation strategies that they used at that time.