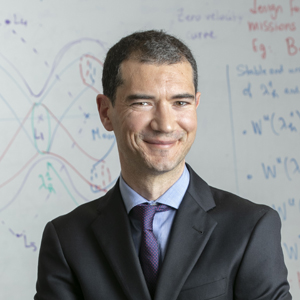 Dr. Pablo Roldan, program director of the M.S. in Artificial Intelligence at the Katz School of Science and Health and assistant professor of mathematics, has co-published “Continuation of relative equilibria in the n–body problem to spaces of constant curvature” in the Journal of Differential Equations that has important implications for cosmology by asserting that the physical space of the cosmos may have some curvature.

According to Dr. Roldan, it is well-known that relative equilibria exist in the solar system, most notably the system formed by the sun, Jupiter and the Trojan asteroids. If the results of his team’s research were not true, then one would not expect to see relative equilibria in curved spaces and that would imply that space is not curved.

However, his results did show that actual instances of relative equilibria in the solar system are perfectly compatible with the space being curved, so cosmologists, he said, are forced to confront this possibility.

“In this paper,” said Dr. Roland, “we prove the long standing conjecture that all non-degenerate relative equilibria of the planar Newtonian n–body problem can be continued to spaces of constant curvature.”