Dr. Ran Drori, along with Tamar Nicole Soussana (YU Department of Chemistry and Biochemistry), Dr. Haim Weissman (Weizmann Institute of Science) and Prof. Boris Rybtchinski (Weizmann Institute of Science), published “Adsorption-Inhibition of Clathrate Hydrates by Self-Assembled Nanostructures” in ChemPhysChem (Aug. 18, 2021). It was featured as the cover story of the November 2021 issue: “The Cover Feature presents tetrahydrofuran (THF) hydrates grown inside a microfluidic device in the presence of safranine O, a fluorescence dye, which binds to the surface of the crystal and inhibits further growth. The binding of safranine might be facilitated by self-assembly into lamellar structures, imaged in aqueous solutions using cryo-TEM.” 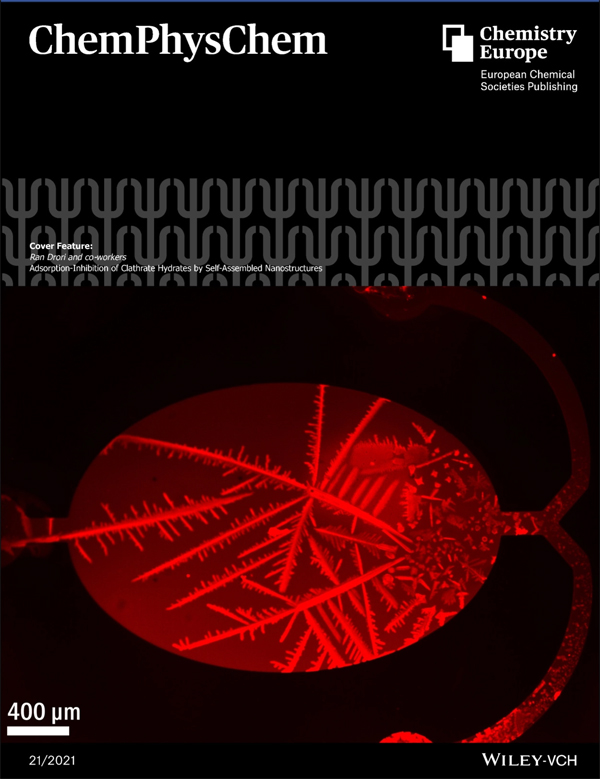 Here is the abstract:

The mechanism by which safranine O (SFO), an ice growth inhibitor, halts the growth of single crystal tetrahydrofuran (THF) clathrate hydrates was explored using microfluidics coupled with cold stages and fluorescence microscopy. THF hydrates grown in SFO solutions exhibited morphology changes and were shaped as truncated octahedrons or hexagons. Fluorescence microscopy and microfluidics demonstrated that SFO binds to the surface of THF hydrates on specific crystal planes. Cryo-TEM experiments of aqueous solutions containing millimolar concentrations of SFO exhibited the formation of bilayered lamellae with an average thickness of 4.2±0.2 nm covering several μm2. Altogether, these results indicate that SFO forms supramolecular lamellae in solution, which might bind to the surface of the hydrate and inhibit further growth. As an ice and hydrate inhibitor, SFO may bind to the surface of these crystals via ordered water molecules near its amine and methyl groups, similar to some antifreeze proteins. 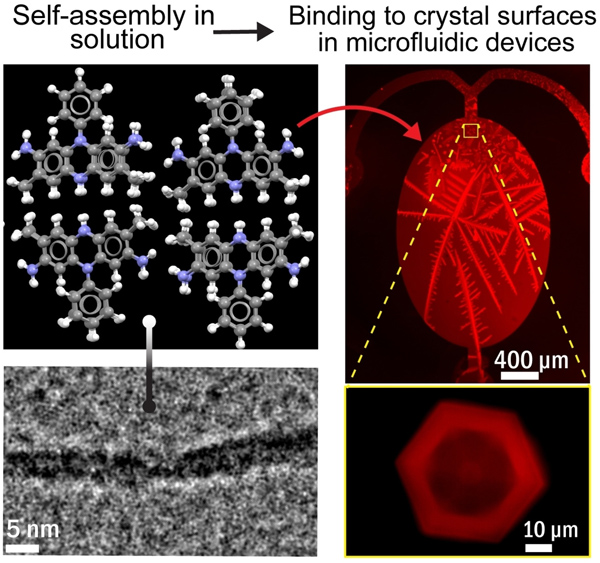