In 2018, Liesl Schwabe, director of the writing program at Yeshiva College, was awarded a Fulbright-Nehru Academic and Professional Excellence Fellowship, a seven-month grant that supported her as she taught several writing classes and conducted research at Presidency University in Kolkata, India. A year later, she gave a lively lecture to a group of students about the wonders of her time in that country.

On May 2, 2002, The Common published another spectacular essay drawn from her time in India,“The Marching Bands of Mahatma Gandhi Road,” about the rich and raucous tradition of marching bands in Kolkata. Here’s how she describes them:

Ethnomusicologist Gregory D. Booth has compared marching bands on the subcontinent to cricket. “Like brass bands,” Booth writes, “the game arrived in India with the British and then, beginning in the eighteenth century, proceeded to acquire a specifically Indian life of its own.” With trumpets, clarinets, and snare drums, Indian marching bands now generally specialize in Hindi film classics. Some bands wear flashy, impeccable uniforms and dance as they play, as can be glimpsed in the edgy, Delhi-based TV show Made in Heaven, in which the band appears on screen almost like party motivators, a frenetic joy exploding out of their tubas. Other bands, especially in more rural areas or smaller towns, are far more ragtag, with musicians in their shirtsleeves, performing with a kind of perfunctory duty, not unlike an office worker going to the post office.

Perhaps most intriguing of all is that “while marching band business relies on weddings and puja immersions—two of the most momentous customs in Hinduism—in Kolkata, all the marching band members were Muslim,” a remarkable fact in a country overwhelmingly Hindu with a violent history of hostility against Muslims (which comprise about 14% of the population).

Much of this activity was disrupted by the pandemic, and she has been unable to find out the fates of many of the people she met: “During the strictest phases of lockdown, large gatherings were prohibited, weddings were limited to a small number of guests, and it’s difficult to imagine how or if the musicians were able to earn any income. I don’t know if Masters Sabir and Mahboob returned to their villages in Bihar, joining the vast numbers of people who left the cities, or if they’ve stayed in Kolkata, preparing to ride out the anticipated third wave.”

The essay is rich in history and street-level observation, the long effects of British colonialism bumping up against millennia-old traditions and customs, and the hope that the bands’ history of resilience in the face of adversity is enough to carry them through. 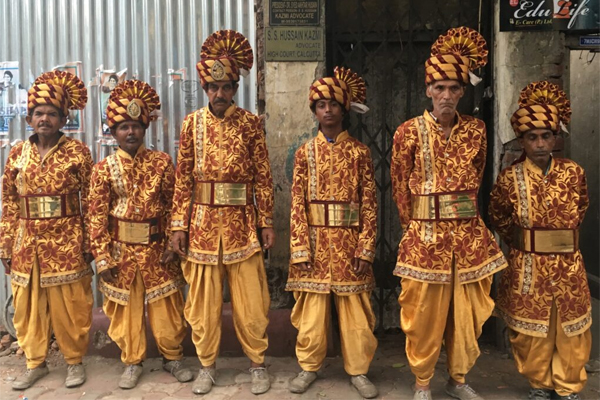 (Photo courtesy of the author)