The Making of a Scholar

Those of you who missed Dr Bevan’s engaging roundtable luncheon may see the text of her lecture here:

At birth, each of us becomes positioned in life. Historical time, family context and geographical place define this positioning. While one often […]

Those of you who missed Dr Bevan’s engaging roundtable luncheon may see the text of her lecture here: 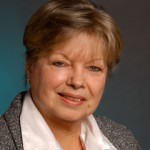 At birth, each of us becomes positioned in life. Historical time, family context and geographical place define this positioning. While one often hears life metaphorically compared to a game of strategy like chess, this metaphor misleads. While life may involve strategies of choice like those of chess, it does not give us all the same initial positioning like the players of chess. Unfair of life? Perhaps. Yet our initial positioning represents our uniqueness as individuals. No two of us are alike.

My positioning created a vortex that swept me into a dialectic producing a life-long quest. The dominant factor here was World War II. I have no recollection of my physical father in my early childhood since he was a soldier in the Pacific theater. He existed for me then only as an aura that filled the nooks and crannies of our rambling New England house in the Berkshire Mountains. One day that aura contracted into an excruciating tension that blocked the sun’s rising over the mountains landscaping our house and nurturing the raspberry bushes in our backyard. My mother lay in bed all day with the shades drawn. Neighbors filed in and out bringing food and solace. Somehow I came to understand that my father had met trouble and had disappeared. He was Missing in Action. His transport ship had been hit by a Japanese kamikaze.

Within the year the postman brought a letter with good news. Rescued in the Pacific, my father ended up with jungle fever in New Guinea. I can smell to this day the jungle of New Guinea from the ration boxes he sent us with the melted chewing gum inside that I appropriated. My mother recovered from her nervous breakdown. The household routine resumed. The mountains glimmered again in the sunlight.

A year after the war my mother, older sister and I traveled to Richmond, Virginia to meet my father upon his return from war. Segregated Richmond pressed itself upon my newly emerging memory like a stamp in hot wax. Red brick row houses with black shutters,
The sultry air in the streets, the stifling indoors. Who knew of air conditioning? During the evening Blacks sat in bunches on the stoops of the red brick row houses. I had never seen a Black in the Berkshires but here in Richmond I had a Black Mammy who watched over me. I loved her and her rotundity passionately. She held my hand as we stood nearby listening to the Blacks sitting in their bunches on the stoops as they strummed banjos and filled the night air with their rich, deep humming. I hear it to this day.

The war created an outlook on life. Especially in my generation – lopped together inappropriately with the generation of the Depression (1919-1940) into what is referred to as the Silent Generation. Our siblings are the Baby Boomers (post-1945). The wartime generation might more accurately be called the Forgotten Generation since other matters preoccupied everyone, and that is precisely the point. We are different than those of the Depression or, for that matter, the Boomers who were born into the emerging consumer society. The Forgotten Generation has been caught between memories of the war and the promise of a better tomorrow offered by the United Nations, by John F. Kennedy’s Peace Corps. We began shaking up the campus in the early ‘60’s. Fair Play for Cuba is one example. Bob Dylan is another. The shocking sociology of C. Wright Mills. The Forgotten Generation, not so silent, provided the spark for later rebellions of the ‘60’s, including that of the Civil Rights Movement. And women’s rights. Rebellion signified life. Action. As opposed to the motionless death of war whose memory sat on our shoulders like a nagging conscience.

The war provoked the social question. How? Why? Newsreels at the local movies imprinted in the memory of the viewer the image of the striped uniform of the KZ inmate, of the emaciated doomed digging their own graves. How could one not become engulfed by what appeared to be the very question of life itself? And so I came to feel that to understand why I live I must first understand why others could not live.

This social question encapsulated the post-war problematique. On the broader, philosophical as well as social scientific level, how had European civilization so transmogrified itself? How does one even begin to incorporate the Holocaust into the social sciences? My Ph.D. mentor, Sidney Hook, illustrious American philosopher, student of John Dewey and Marx scholar, taught that every complex phenomenon is made up of simple units. To understand the whole, one must first grasp its constituent parts. And so these broad questions held within themselves issues like how might social fragmentation be combated in modern industrial society? What are the social repercussions of alienation/anomie? Why do social institutions fail? How does conflict function socially?

War cuts into what Walter Bagehot called the “cake of custom.” Strategically, the war reshaped altogether my positioning in life. Traditionally, politics and the study of politics fell into the purview of men. Before the war no graduate schools in political science admitted women. I was included in one of the first post-war programs to admit women – a consortium program of the University of Massachusetts, Amherst College, Mt. Holyoke College, Smith College and M.I.T.

I came to European studies by natural inclination of family background and geopolitical realities. In the 1960’s the world was still Eurocentric. Decolonization that would bring into life other power centers had just commenced. The Cold War turned Europe into a cause célèbre. Kennedy assured trapped West Berliners that he was with them – ich bin ein Berliner. At the time of Kennedy’s assassination I was a graduate student in Freiburg, Germany. Freiburg at that time still had vast bombed out areas. Men walked around without limbs and with armbands, yellow with three unmistakable black dots indicating they had been soldiers.The news of Kennedy’s death sent shock waves through West Germany. The towns people of Freiburg conducted a torchlight parade at midnight in Kennedy’s honor. Life in Europe then was politically tumultuous – the political left of France and Italy was Communist, it was promising with the advent of regional integration and it was always dangerous. Intrigues a la James Bond had reality. Flying into West Berlin meant flying over German Communist territory, a potentially dangerous venture that registered in the dimmed lights of the plane’s cabin and an indescribable silence. A corner-turning experience for me was visiting refuseniks in the Soviet Union. Being constantly watched, under constant duress and feeling constantly insecure in a totalitarian state provided incomparable political education. I lectured extensively and wrote about this experience. Of special note is that such times of imminent danger exhilarate and motivate since they crystallize and make translucent moral choice.

The internal contradictions of European civilization – its dialectics, seduced me. Voltaire gave expression to these dialectics in professing the universality of humankind but likewise invalidating the claims of cultural particularity like that of the Jews. Can universal humankind exist except as a moral construct? The Fascists insisted upon the particular over the universal. The Communists in their drive for the universal got caught on the horns of national particularism. My Ph.D. dissertation, that became a book, raised the question: Why are revolutionary Marxism and Burkean conservatism both operative in 20th century politics? My answer was that they both provide a concept of community that fills the void of atomistic, individualistic Liberalism.

On another note, I interviewed Jewish survivors of World War II in Bulgaria whose deportation their non-Jewish compatriots prevented. Virtually all 50,000 Jews in Bulgaria proper were saved. Why does difference flourish in one national community but not in another? I have written on the foundations of nationalism that pursued the Disraeli- model of the transformation of a “have-not” class into a separate national identity. How do changing circumstances produce new national identities? Solzhenitsyn writes, for example, that the zeks of the Gulag in Soviet Russia had all the identity characteristics of a nation.

How does collective memory define national identity? How we choose to remember our history through memorials, museums and other public places invariably involves a complicated political process. Memory rarely goes uncontested. Think about the memorial of 9/11. Of particular interest to me has been how Germans will transmit the memory of the Holocaust to their positerity. I have been working on the documentation related to the Berlin Holocaust Memorial that, ironically, was designed by the New York Jewish architect, Peter Eisenman.

Western society may not have invented the wheel but it has invented the technological state. Max Horkheimer of the Frankfurt School in his Dialectic of the Enlightenment discussed how scientific advances could, indeed, promote social progress as the Enlightenment assumes but they could also make possible industrial genocide. What is the relationship between science/technology and Western values? I have just finished an article on this subject which is under review for publication. The totalitarian state could not exist without the control mechanism provided by modern technology. I am presently writing an article on “the totalitarian challenge to democracy since 1910” that will be published in a book on world democracy. How are we humans adapting to the technological environment of cyberspace? What will be the social repercussions of this adaptation? The current discussions in epigenetics and in neuroscience catch my ear.

How can the citizenry make its will felt in the technostate? I began my career writing about the New Left, differentiating the American and European movements on the basis of their attitude toward and their use of technology. Civil disobedience (and radical disobedience) has basically dried up as a protest methodology. Of current interest is the question: Why was the Occupy Wall Street movement ineffective? Perhaps the last heroine of civil disobedience was Petra Kelly, leader of the German Greens Party in the 1980’s. Asked to write about her, I got to know her before she was murdered in 1991 after German reunification. Kelly wanted to bring the American doctrine of civil disobedience to Germany. Born in the same town as Joseph Mengele, Kelly felt burdened by history. Each year she introduced into the German Bundestag resolutions about Holocaust remembrance. My biographical writing on her is the official Greens archive article on Kelly.

Europe finds itself in stormy waters again, The euro crisis. The immigration crisis. And we are back to square one: Europe as the Bermuda Triangle of the Western world. My sabbatical project begun in the spring 2012 focuses on U.S.-Europe relations. Categorically expressed, Europeans resent the United States and yet still need the military protection of the United States. Europe has changed and the United States does not buy into this change. My study argues for a new Western partnership based on mutual capabilities and respect for differences in world power outlooks. It includes Israel as a vital part of this Western enclave. The study pursues a normative argument: the need to preserve and strengthen the Western Enlightenment tradition. And this, of course, leads into a no doubt thorny post-modern discussion.