Part 2: Proust as a Jewish Scholar

This week, we hosted author and scholar Adam Kirsch, who discussed a cultural understanding of Marcel Proust. Click on “more” to see Dr Newton’s  introduction: 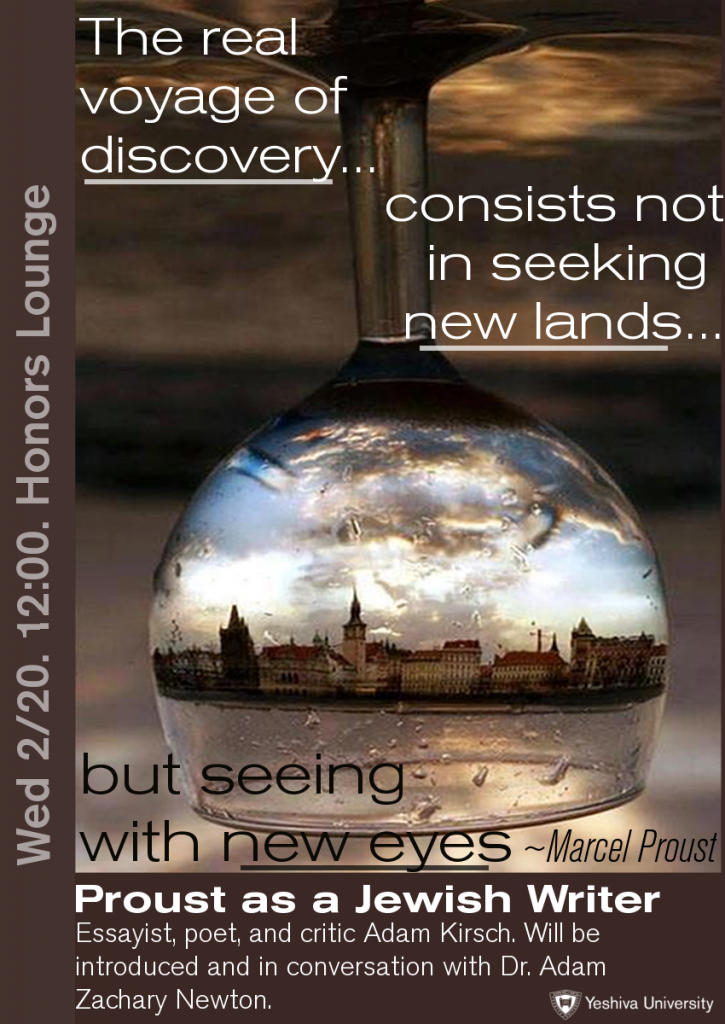 This week, we hosted author and scholar Adam Kirsch, who discussed a cultural understanding of Marcel Proust. Click on “more” to see Dr Newton’s  introduction: 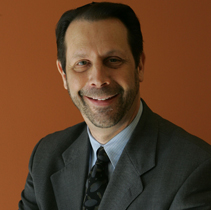 Before I commence my introductions proper, I thought it apropos to relate an anecdote that I suppose we could class under the heading of “nowhere but here” (For the uninitiated, that’s YU’s new marketing slogan.)  While at my office desk last week, I received a phone-call from Production Services (a.ka. the mailroom) asking me whether there was someone named Tánac in the department: a large box labeled “English—Tánac” had been received.  Hmm, no one by that name in the department unless they’re flying under the radar somehow.  So I said, “could you spell that surname for me?”  T-A-N-A-K-H.  Oh, “tanakh!”  Well, that’s one problem solved; but that still left dangling the question of who in the English department might have ordered a set of Tanakh.  Oh, ok, wait a minute; I get it.  The label reads, “English Tanakh,” the Hebrew Bible in English translation.  Ah well, that’s likely intended for someone in Jewish Studies, since “English” in this case does not signify the name of the department I currently chair.  Second problem solved.  And yet, for a brief moment, at least at Yeshiva College, Classical Jewish Sources and the department particular associated with literary studies ever so tantalizingly intersected and crossed paths.   Call that the space of conjunction—the vav ostensibly linking Torah and Madda—that bridges Hayyim Nachman Bialik and Marcel Proust whom you’ll hear about today, and implicitly connects both of them as writers—a poet/sometime-essayist and a novelist—to the exegetical imagination and to the interpretive poesis we make as both readers and lomdim.

But now, to business and to crossing paths on a more interpersonal plane.   Although we might have bumped into each other in Cambridge at some point in the ‘90s, I first became aware of Adam Kirsch while teaching at UT Austin where I kept up subscriptions to various East-Coast based magazines with strong commitments to the art of the literary review: The New Yorker, The New Republic, Atlantic Monthly.   One of those reviews, a piece on the poet Jorie Graham, appeared in The New Republic in March, 2000.   It began like this: “An admirer once approached T.S. Eliot with a question about ‘Ash Wednesday,’ perhaps his most obscure poem: “What did you mean when you wrote `Lady, three white leopards sat under a juniper-tree’?” The poet replied: “I meant, `Lady, three white leopards sat under a juniper-tree.’” This is the expected response, the only possible response. If poetry really is the best words in the best order, then no paraphrase or explication of a line can ever be as accurate as the line itself. Kirsch went on to formulate a familiar distinction for the reading of poetry—or indeed for any literary text: the difference between “the phenomenal experience that we have immediately when we read the words” on one hand, and the “theoretical level of communication [that] proceeds directly from poet to reader over the head of the poem,” on the other.  “It is at the phenomenal level that we read a poem,” Kirsch wrote.   “At the theoretical level, by contrast, we ‘do a reading’ of a poem, in the academic phrase. To read is to allow the poem to shine out as what it is, to take in what it presents. To ‘do a reading’ is to apply to the poem a technique whose product hovers above or alongside the poem itself as a ghostly presence.”  I was so struck by this as a statement, implicitly, about what it means to engage literary discourse in an academic context—say, the undergraduate classroom, where my students and I both read poems or novels or literary essays and do readings of them—that I regularly cited it in my syllabi or first-day class presentation.  (In fact, my current crop of students and I happened to discuss it last week in my Roth, Roth, and Roth honors course.)   As it turns out, in those same syllabi, I also like to include a favorite passage of mine from a preface to a translation of Ruskin by Marcel Proust entitled “Sur la lecture” [On Reading], which goes something like this: “…by a singular and, moreover, providential law of mental optics, that which is the end of  [authors’] wisdom appears to us as but the beginning of ours, so that it is at the moment when they have told us all they could tell us that they create in us the feeling that they have told us nothing yet….We would like to have [the writer—or, we could add, the teacher] give us answers, when all he can do is give us desires.”  So, fortuitously enough, Adam Kirsch and Marcel Proust had already intersected for me long before the idea for this Honors lunch was first broached by Dr. Cwilich and David Sugarman.

As to the formal particulars, I hope Adam Kirsch’s reputation proceeds him here as a freelance reviewer, literary critic, and poet in his own right.  He is now a senior editor for The New Republic, and has written freelance articles for many different publications including Slate, The New Yorker, The Times Literary Supplement, The New York Times Book Review, and Poetry.   His books include two volumes of poetry, The Thousand Wells and Invasions, two books of criticism, The Wounded Surgeon: Confession and Transformation in Six American Poets from 2005 and The Modern Element: Essays on Contemporary Poetry from 2008, and two biographical studies, Benjamin Disraeli and Why Trilling Matters.  Finally, he writes the weekly column “The Reader” on Nextbook and maybe most relevantly for an audience of Yeshiva College students, a weekly column of “Reflections and Interrogations” on daf yomi for Tablet Magazine.    He is astonishingly prolific, writes with authority about a wide range of subjects and writers, and in the public sphere where clarity counts, represents an intellectual force to reckon with.

Adam and I happened to see other last in person at a Chanuka party thrown by the Forward where we got into a discussion about the Slovene philosopher and cultural critic Slavoj Žižek who is somewhat controversial in Jewish circles.  But almost necessarily, that sort of setting (I think it was in the Puck building in NoLiTa) lends itself to the conditions satirized by a famous line from one of Adam’s favorite poets: “In the room the women come and go/ Talking of Michaelangelo.”  The Honors Lounge is quite a different venue, of course, where coming and going is all about the pizza.   But I know we have important things to talk about here, especially today as catalyzed for us by Adam Kirsch.  And so I look forward with you now to a presentation and conversation led by “the other Adam,” as Dr. Cwilich calls him: about Proust and Bialik, about ethics and exegesis, and about Jewishness as a kind of textual predisposition, a continuum on which limudei kodesh and verbal art both make their imaginative demands.   In this vein, Bialik has a wonderful midrashic formulation about prose vs poetry.  “To what may the masters of prose be compared?  To one who crosses a river walking on hard ice frozen into a solid block.  And to what may the writers of poetry be compared?  To one who crosses a river when it is breaking up by stepping across floating, moving blocks of ice.   It’s lucky for us that Adam Kirsch is adept at both kinds of locomotion.