At an event in honor of Constitution Day, October 1st, on Yeshiva University’s Wilf Campus, attorney Cara Suvall greeted students the same way she typically greets her clients: “I’m sorry we’re meeting under these circumstances, but I hope over time we’ll get to know and trust each other.”

According to Suvall, that message is not […]

At an event in honor of Constitution Day, October 1st, on Yeshiva University’s Wilf Campus, attorney Cara Suvall greeted students the same way she typically greets her clients: “I’m sorry we’re meeting under these circumstances, but I hope over time we’ll get to know and trust each other.” 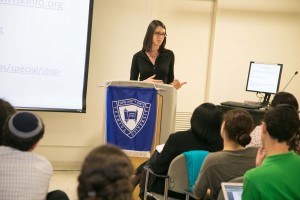 According to Suvall, that message is not one her clients—often teenagers from minority backgrounds who have been the subject of discrimination—are used to hearing. Suvall is a staff attorney for Bronx Defenders, an organization that provides legal representation and advocacy for low-income residents of the Bronx. With Dr. Delores Jones-Brown, a professor from the John Jay College of Criminal Justice, City University of New York, Suvall offered students from both campuses insight into the recent ruling by a federal judge, Shira Scheindlin, that became the subject of much controversy this summer: that stop-and-frisk, the police practice of stopping, questioning and frisking pedestrians in New York City which has been common for decades, was unconstitutional.

“This is a real constitutional issue and it’s not just about New Yorkers, it’s about all Americans,” said Dr. Sam Gellens, assistant director of the Jay and Jeanie Schottenstein Honors Program, which co-sponsored the event with YC’s Office of Pre-Law Advisement and the Pre-Law Society. “It’s one more piece of the racial puzzle and is especially relevant for our University, which is situated in the heavily Latino neighborhood of Washington Heights. Understanding stop-and-frisk is critical to understanding our own community and how it relates to others.” 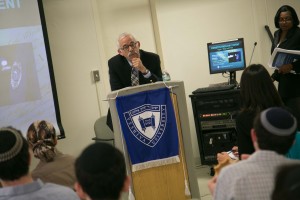 Gellens began the evening by grounding the students who came from both YC and Stern, among them current students in both Honors Programs, in the origin of the debate: the 8-1 decision in 1968 by the Supreme Court in the case Terry v. Ohio, which gave police officers the right to stop suspects without a search warrant if they felt that they posed a threat to both officers and the community. He revisited Chief Justice Earl Warren’s claim, writing for the Court, that the decision involved “balancing the need to search against the invasion which the search entails”—essentially, that stop-and-frisk was constitutional because it was reasonable under the circumstances. But Gellens also noted the lone (and fiery) dissent of Justice William O. Douglas, who used the word “totalitarian” in his belief that the Court’s decision violated both the Fourth and Fourteenth Amendments.

Jones-Brown’s presentation, “Policing, Race and Equal Protection: The Implications of stop-and-frisk,” focused on the history of the practice since 1968 and an exploration of legal challenges to it. She took students through statistics she had gathered from police reports through her research at John Jay’s Center on Race, Crime and Justice about stop-and-frisk, noting that African- Americans and Hispanics accounted for over 80 percent of total stops despite amounting to a little under 50 percent of the city’s population and that the overwhelming majority of pedestrians stopped were innocent. For her, there seemed to be little correlation between stop-and-frisk and reduced crime. 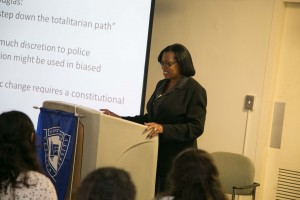 “We all want to be safe and feel safe, but in the land of the free and the home of the brave, we also want to have a great deal of liberty, because the founding fathers said that’s what we are entitled to as our inalienable right,” said Jones-Brown. “What has happened in New York, arguably based on certain good intentions, has jeopardized that for some.”

Suvall offered a more personal view of the issue as she shared with students how stop-and-frisk impacted clients she represented, one of whom later went on to became a plaintiff in the suit that eventually led to Judge Scheindlin’s ruling on the issue this past summer. “It was meaningful for me to see my client, who was so desperate and about to lose his job one day, become a leader for change in New York City the next,” Suvall said. “But it was also really disappointing, because the same exact thing could happen to him again tomorrow.”

The presentations were followed by a Q and A session that touched on many other important aspects of the debate, such as how stop-and-frisk impacted women and possible alternative methods of policing, as well as how to define whether the practice is successful as a deterrent to crime.

For Brian Dulitz, co-president of YU’s Pre-Law Society, events like the Constitution Day discussion are just one of many ways he and other members of the Society may immerse themselves in legal and political issues that are shaping the field of law today. “Knowing the laws behind everything is a great stepping stone to understanding what’s happening in almost any field around you, from business to medicine and more,” he said.

This event was organized and implemented by Dr. Gellens and Mrs. Ariella Hellman, Esq., YC’s Pre-Law Advisor, with additional help from Ms. Debbie Beaudreau, the Pre-Professional Advisement Coordinator and from the Dean’s Office, Mr. Nicholas Pitisirikos.