By hannahrozenblat On November 22, 2018 · Leave a Comment · In Events, Luncheons, Pictures

We are pleased to announce that the Honors Program has both a new home and a new director!  Over the summer, the program moved from Furst Hall to Belfer Hall, and Dr. Daniel Rynhold took over as the director of the program.  Following this transition, the Honors Program had an eventful October, packed with luncheons, lectures, and cultural activities. 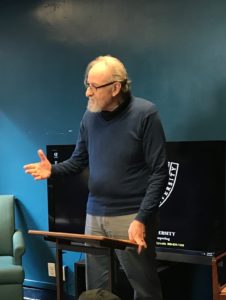 One of the highlights was the Nobel Nanosecond event on Wednesday, October 24th, an Honors Program yearly tradition following the announcement of the Nobel Prizes.  Students and faculty joined for this annual sprint of six-minute lectures by professors knowledgeable in the prizes’ respective fields. With Prof. Gabriel Cwilich as MC, the event featured the following professors discussing the prizes: 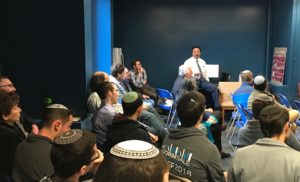 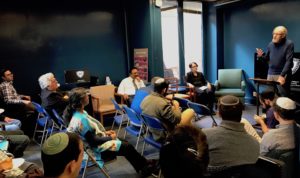 On the following day, Thursday, October 25th, a special visitor drew a crowd to the Honors Lounge for “My Adventures with God: In Conversation with Stephen Tobolowsky.”  Stephen Tobolowsky is an American actor, author, and musician who has appeared in over 200 films including Groundhog Day, Memento, Freaky Friday, and Thelma & Louise, and numerous television shows, including The Mindy Project, Silicon Valley, and Glee. He is the author of The Dangerous Animals Club, Cautionary Tales and most recently, My Adventures With God, which he discussed during lunch in conversation with Dr. Daniel Rynhold. Tobolowsky spoke about his relationship to Judaism and faith, sharing amusing stories from his life and career. 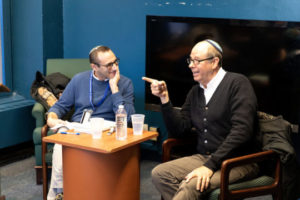