Before They Got the Virus, Their Blood-Oxygen Levels Dropped Financial Actors Seek Edge by Withholding Information 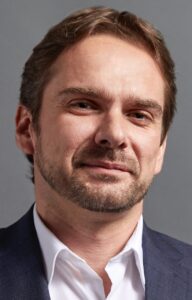 The incidence of life-threatening diarrhea plummeted among residents in several rural villages in Ghana over a five-month period after they began using water purified with repurposed hemodialyzers, according to a study published by a Katz School professor in Scientific Reports in July.

“This is a major public health outcome particularly since diarrhea is well known to be associated with deleterious consequences, such as acute kidney injury and death particularly in younger children and the elderly,” said Dr. Jochen Raimann, who teaches in the Biotechnology Management and Entrepreneurship program.

Dr. Raimann, who is a board member of Easy Water for Everyone, the nonprofit organization which funded the study, and his colleagues collected data between February and December 2018 in four rural communities in the Ada-East district of Greater Accra Region in Ghana before and after the implementation of the NUF500, a hemodialyzer membrane filtration system manufactured by the Israeli company NuFiltration.

“The filtration system used in this study was clearly associated with a substantial reduction in the incidence of self-reported diarrhea compared to the prior period and compared to a control group without the system,” said Dr. Raimann.

An analysis of monthly household surveys found that the risk of developing diarrhea among the 400 villagers who consumed purified water declined by 72 percent after the installation of the filtration system. The incidence of diarrhea fell to 0.05 cases per person per month from 0.18 compared to the four control villages where the number of cases declined to 0.08 ppm to 0.11.

“This translates into an incidence rate ratio of 0.38, which is a remarkable public health effect of a 62-percent risk reduction relative to that in the control villages,” said Dr. Raimann, citing a follow-up paper published recently in Water Supply. “This is achieved with the use of a device that is very simple to use and tremendously cost-effective.”

In many countries, contaminated water is the underlying cause of acute gastrointestinal disease, and recent international research efforts by the International Society of Nephrology have shown that diarrhea is the leading cause of acute kidney disease in developing countries and contributes to high mortality rates among weaned children younger than 5 years of age and the elderly.

The World Health Organization and the World Bank estimated that 1.1 billion people worldwide have access only to unsafe drinking water. Eighty-eight percent of all diarrheal diseases, according to the WHO, are caused by the consumption of unsafe drinking water and lack of adequate sanitation. In the villages that were studied by Dr. Raimann’s team, surface water from ponds, creeks and rivers polluted by coliform bacteria (Escherichia coli) and viral pathogens was the main source of drinking water.

The study, “Public Health Benefits of Water Purification Using Recycled Hemodialyzers in Developing Countries,” was conducted with the approval and support of Ghana Health Services and the federal and local government. The researchers provided villages with filtration systems containing re-sterilized hemodialyzers repurposed from their use in kidney dialysis. The devices are capable of producing up to 132 gallons of water per hour free of bacteria and viruses for domestic use.

“The remarkable aspect of this filtration system,” said Dr. Raimann, “is that not only does it not require electricity to produce clean drinking water, it’s built of hemodialyzers that were used in clinical therapy of renal failure patients and saved by re-sterilization from going to waste.”

He said the NUF500 filtration system can help achieve “Sustainable Development Goal-6,” one of 17 goals established by the United Nations General Assembly in 2015, to “ensure availability and sustainable management of water and sanitation for all” by 2030.

“The use of repurposed hemodialyzers that had already saved lives once in kidney dialysis treatment can again serve as an affordable means of water purification, saving lives all over the globe,” he said.

The Katz School of Science and Health is an academic powerhouse in the heart of New York City. It offers master’s programs in five sectors that are redefining the economy: Artificial Intelligence, Cybersecurity, Biotech and Health, Digital Media, and Fintech. In the lab, classroom and clinic, we lead with kindness, integrity, generosity and a commitment to making the world safer, smarter and healthier.

Click here for information about the Bright Futures Scholarship Initiative that offers a total fixed tuition of $25,000 for science and technology master’s degrees.