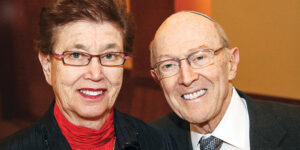 The late Mordecai Katz with his wife, Dr. Monique Katz.

The Katz School community honors the memory of Mordecai Katz, an engineer and businessman turned investor and philanthropist, whose vision and generosity led to the founding of the Katz School of Science and Health in 2016.

Yeshiva University President Ari Berman said Katz, who died on March 19 at the age of 88, will always be remembered as a builder of institutions, an enabler of dreams and a devoted supporter of Jewish causes. “He exuded kindness, wisdom and warmth. He was one of the most beloved people in our Yeshiva University family.”

Katz rose quickly through the corporate ranks, starting as an engineer and ultimately moving into the executive suite. In 1978, he earned a law degree from New York University. After practicing at a major New York City law firm, he pivoted his career once again, becoming a private investor and prolific philanthropist with deep ties to Yeshiva University.

“Dr. Katz always said the best investment you can make is in people, and this philosophy motivated his investment in the Katz School,” said Dr. Paul Russo, Dean of the Katz School. Katz’s son, Michael, said: “It’s a great source of pride knowing that thousands of students here and in Israel have had the ability to further their education due to my father’s efforts. I will always try to live by the lessons he taught me and strive to honor his legacy.”

Dr. Monique Katz, a graduate of the Einstein College of Medicine, said her husband was one of the smartest and wisest individuals she had ever known. “It was a true honor and privilege to be his wife.”

Mordecai D. Katz z”l; may his memory be a blessing.