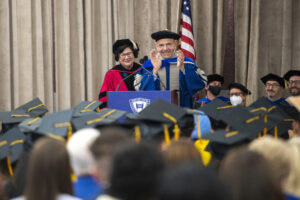 Dean Paul Russo, with Provost Selma Botman standing beside him, pays tribute to the graduating class.

The Katz School of Science and Health recently conferred 123 master’s degrees to graduating students whom Dean Paul Russo called “values-driven practitioners” for their academic integrity and commitment to the compassionate care of others.

“You stand for truth, reflected in your scholarship and applied in your practice. You are champions of a life built on values—respecting the worth of every individual and their right to care and full participation in life—economically and socially,” said Dean Russo at the school’s sixth commencement exercises on May 16. “You are compassionate practitioners who bring your know-how in science, technology and health to transform our world for the better and move history forward. You are people of integrity, who when moving science to practice will never sacrifice the invaluable in the pursuit of the valuable.”

He cited Katz students who are studying data analytics and artificial intelligence using deep-learning algorithms for gesture classification in stroke rehabilitation for patients who have lost the use of their hands; biotechnology students working with startup companies on the development and commercialization of novel cancer treatments; and cybersecurity students creating new methods to prevent cyberattacks on watches, phones, and even pacemakers.

“Each of you brings a unique sense of purpose to the Katz School,” he said. 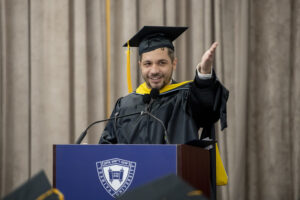 Jesus Olivera, who received a master’s degree in Data Analytics and Visualization, said the foundation for success is “self-discipline, a positive attitude and a commitment to one’s dreams no matter how big the obstacles.”

In the main commencement address, Lorraine Marchand, an adjunct professor in the Biotechnology Management and Entrepreneurship program and general manager of life sciences at IBM Watson Health, said the Katz School was built on “championing women” in STEM. She cited Dr. Monique Katz, a co-founder of the Katz School with her late husband Mordecai, a radiologist for nearly 60 years and a graduate of YU’s College of Medicine in 1963, as a trailblazer in a male-dominated profession.

Marchand shared obstacles she faced herself as an ambitious science writer for the National Institutes of Health in the 1990s. A male colleague took her aside one day and told her that her efforts in communicating advances in medical science and technology had been noticed by senior people in the institute. She was taken aback, though, when she was told to “stop working so hard” because, the colleague said, she was “making him look bad.”

She remembered her father’s advice to stay focused on doing the best job she possibly could, while observing that NIH clinical trials on cardiovascular disease were being conducted only on middle-aged white men, ignoring the fact that heart attacks are one of the most common causes of death among women.

“I observed a problem: we needed a clinical research system and a workplace that included and welcomed all people, one that could scale with the pace of scientific advances, one aimed at getting innovative new therapies to patients more effectively,” said Marchand. “I decided to devote my career to helping create such a system, and I vowed to do this by working the problem from different angles.” 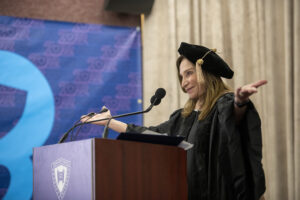 Biotech Professor Lorraine Marchand told the graduates that she is “truly excited by the new ideas and new products you will help imagine and realize.”

For the past 30 years, she has transformed the process of developing new drugs and bringing novel healthcare products and services to market for Bristol Myers Squibb, Labcorp and IBM Watson Health, as well as startups that she’s co-founded and mentored. In her book, The Innovation Mindset, she profiled men and women who’ve been innovators in their fields.

“As diverse as their achievements are, I found them inspiring in the same way I am inspired by our Katz School graduates today,” said Marchand. “In the courses I teach at Katz, I see a growing number of bright young women and men who aspire to be innovators and entrepreneurs in the sciences, health, and technology. I am truly excited by the new ideas and new products you will help imagine and realize.”

Marchand said Katz students have a driving curiosity, a passion for problem-solving and a welcoming attitude toward change, qualities that in Dr. Katz’s time were considered the sole province of men.

“I stand before you today as a testament to the falsehood of that idea,” she said. “More importantly, I look at you—graduates and your proud families—as proof that the future, the future of innovation—your future, our future—is bright indeed.”

In another address, Jesus Olivera said a chance encounter with a kind and attentive Katz admissions officer at a career fair led to his enrollment in the Data Analytics and Visualization master’s program. Barely a year into his course of study, he accepted an offer to join IBM as a data scientist and engineer. He said the foundation for success is self-discipline, a positive attitude and a commitment to one’s dreams no matter how big the obstacles. 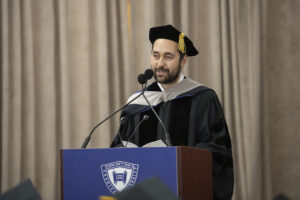 As a graduate student, Daniel Goldsmith said the Katz School allowed him to collaborate with faculty on designing an innovative curriculum for applied math and data analysis.

He paid tribute to his parents from the podium, calling them his “first role models and first teachers, their bountiful love always a source of inspiration and resilience in the face of adversity and challenge.” He then thanked them for making the trip from Puerto Rico to his graduation—Mami y papi, gracias por estar aca conmigo esta manana.

“What an incredible journey these two years have been,” said Olivera. “With Covid lockdowns in New York City, social unrest and depressing news on TV, joining the Yeshiva community and making great friends with classmates and professors has truly been a wonderful gift and a blessing.”

In closing remarks, Daniel Goldsmith, who holds an M.A. in mathematics and is CEO of a startup called Heights Labs, lauded the Katz School for allowing him to collaborate with faculty on designing an innovative curriculum for applied math and data analysis. He has since returned to the Katz School to teach Network Science as an adjunct faculty member.

“This freedom, the opportunity to be mentored by great faculty and to design my own path, inspired my professional interests and advancement,” said Goldsmith. “No other program offers the range of cutting-edge and advanced courses with the theoretical underpinning in the way they do here.”