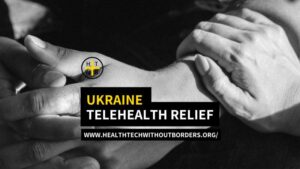 “This all started on Sunday, February 27, at 11 p.m. It was the first email I sent out on this topic. It was literally the start of the war.”

To say that Dr. Marissa Barrera was quick to respond to the call to help those in need would be an understatement. Despite wearing many hats at the Katz School of Science & Health—assistant dean of health sciences, associate professor and director of the master’s program in Speech-Language Pathology—Barrera didn’t hesitate.

“I randomly saw something on Facebook that was like, ‘If you speak Russian, if you’re a healthcare provider, please fill out this form. We’re gathering resources,’” she said. Even though the post came from a stranger, Barrera’s response was immediate. “I said to myself, ‘I have to fill this out.’ I don’t speak Russian, but I knew I had a team of students and faculty who would step up behind me.”

Within 48 hours of signing up, she and Andrew Christler, assistant professor and clinical director, were on the phone with Hicham Naim and Marianna Petrea, founders of the organization behind the Facebook post that would soon become Health Tech Without Borders (HTWB). Today, HTWB is an independent nonprofit movement that gathers health professionals from all over the world to provide digital health and telehealth aid where it’s needed most. At the time, the movement didn’t have a name, much less a website.

All Barrera knew was that they were gathering volunteers to provide free telehealth to refugees and those trapped in Ukraine, and that they didn’t know how to effectively communicate with individuals facing severe trauma. This was where the Katz School could help.

“We’re not social workers, we’re not psychologists, but one thing we are as medical speech pathologists is well equipped to communicate effectively with patients using sensitive bedside manners,” she said. The Katz School’s speech-language pathology program is one of a few in the country that focuses on medical, evidence-based practice, integrating neurology, biology and a holistic approach to patient care.

Within 72 hours, Barrera and Christler recruited Deion Adams, a faculty member and Yeshiva University social work doctoral student who specializes in healthcare counseling. Together, they developed a script for the first training module for HTWB. Recorded on a Sunday, the training addressed the basics of communicating with patients via telehealth, particularly for patients undergoing emotional, psychological and physical trauma.

One of the things that made this possible, said Barrera, was the unwavering support of Paul Russo, dean of the Katz School, and John Vivolo, director of online and campus learning strategies at Katz. As Barrera and Christler continued to work with HTWB, they realized an additional training was needed specifically for parents looking to help their children through the trauma of war. They went to Dean Russo for guidance, and he connected them with someone who could help: Rona Novick, dean of the Azrieli Graduate School of Jewish Education and Administration at Yeshiva University.

Barrera approached Dean Novick, a pediatric trauma specialist, with this request: “I need a very short, very informal video for parents who have to be the sole support for their children right now. We know these are women, we know they’re displaced, we know they’re missing their homes, they’re literally traveling with nothing on their backs. They’re scared, they’re terrified. What can we offer them?” A week later, Dean Novick had put together a training video—once again, recorded on a Sunday.

Another key resource Barrera and her team sourced for HTWB was a series of communication boards that contain translations of key words in three languages: Ukrainian, English and Polish. The boards give a voice to people when languages don’t compute.

Katz provided these resources—two training modules and communication boards in multiple languages—to HTWB within 30 days of the start of the war. By mid-April, the trainings had been picked up by a series of schools in Poland that then disseminated the work to their frontline social work students.

Barrera and Christler also went on to give the first international presentation to the HTWB clinical team on the subject of basic human communication when providing psychological first aid. More recently, HTWB asked for help finding experts who could put together resources for victims of war crimes. While this is outside their immediate scope of practice, they’ve been seeking out well-known organizations and experts who specialize in providing psychological first aid to war crime victims and plan to develop additional resources for HTWB.

“At the start, there were very few physicians and nurses,” said Barrera. “So Andy and I would log into Doctor Online, an approved telehealth platform where we would write in English and it translates to the native language of the other person, and essentially provide triage.”

Since Katz joined as a partner on the third day of the war, HTWB and Doctor Online have conducted nearly 50,000 patient consultations. The nonprofit movement has gained 11 more partners, including notable institutions like Massachusetts General Hospital. Their volunteers include 800 clinicians and psychologists from over 20 countries.

Now, HTWB is about to approach several global organizations with their model for delivering healthcare during times of crisis, and Barrera remains involved, sitting in on the leadership calls and serving on their medical advisory board.

This all happened in the course of four months and, as she said, “It’s not over.” There’s still work to be done, and she’ll be there doing it, along with countless members of the Katz School and Yeshiva University team who have chosen to step up.

“We are global citizens, and it is our call to duty to help a human in need,” said Barrera. “And that’s the Katz way. We’re smarter, we’re safer, we’re healthier. That’s our Katz foundation.”