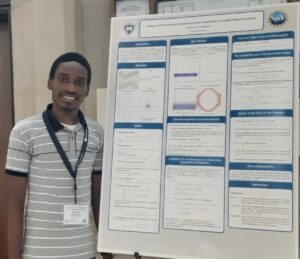 Samuel Akingbade, a Ph.D. student in the mathematical sciences program, at a recent conference.

With the help of an NSF grant, Katz School mathematics Ph.D. candidate Samuel Akingbade is researching the mathematical possibility of continuously capturing energy derived from small amounts of vibration in human and natural activity.

Energy harvesting devices, which consist of systems of oscillating beams in, for example, skyscrapers, trains and bridges, are made up of piezoelectric materials, which produce an electric charge under mechanical stress.

Akingbade is creating a mathematical model that will try to determine the right amount of outside force on these beams that would overcome the effects of internal friction, which stops the beams from vibrating.

“In order to keep the beam oscillating in perpetuity, the outward force must dominate the internal friction and by this, we can always guarantee a gain in energy,” said Akingbade, whose research is supported by an NSF grant awarded to Yeshiva University mathematics professors Marian Gidea, Edward Belbruno and Pablo Roldan. “The oscillations in materials when they vibrate produce electricity that can be stored in batteries or capacitors.”

Dr. Gidea, a former NSF mathematical sciences program director and Akingbade’s advisor, said that Akingbade’s approach is unique in that most researchers neglect the effect of friction in mathematical models on dynamical systems that describe, for example, the swinging of a clock pendulum or the flow of water in a pipe. “They consider it an afterthought,” he said.

Akingbade recently presented his research at the 2022 Houston Workshop on Hyperbolic Dynamical Systems and in a poster session at the Midwest Dynamical Systems Early Career Conference at the University of Notre Dame.

His research, according to Dr. Gidea, has larger implications in the context of celestial mechanics, in which researchers analyze the motion of satellites in space where there is little or no friction. “Mathematical models neglect the effect of atmospheric drag on low-orbit satellites and just study the idealized motion of the satellite,” he said, “which is impractical.”

Akingbade, who is originally from Nigeria, said he’s fortunate to work alongside Dr. Gidea, whom he met four years ago during a summer research symposium in the Republic of Benin.

“I was interested in working with him because his research interests align very much with what I’m undertaking in my Ph.D. work,” he said. “Furthermore, studying at Yeshiva University offers opportunities to learn alongside a dynamic and creative student body, and unparalleled diversity in the most vibrant city in the world, New York City.”