Researchers Studying Wearable Technology for Stroke Patients For This OT, Empathy is Another Pair of Hands in the Healing Process 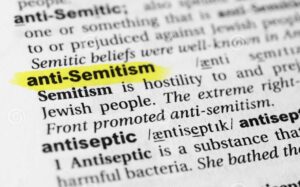 Andrew Catlin, director of the Katz School’s M.S. in Data Analytics and Visualization program, and faculty member Brandon Chiazza have received a $7,500 grant from the Provost Faculty Research Fund to create a definitive repository of anti-Semitic hate speech.

“We want to create an index like the Dow Jones Industrial Average for anti-Semitic hate speech,” said Catlin, “that will raise the research profile of YU, support our U.S. News ranking, attract exceptional faculty and students, and help our students get great jobs.”

The grant will support three interrelated projects: 1) the creation of a database of hate speech research, or an automated meta-analysis around labeling, polysemic meaning and the contexts for general hate speech; 2) a set of labeling heuristics that could be implemented internally or by an outside vendor; and 3) a sufficiently large body of anti-Semitic hate speech data.

Each project has been designed with two goals in mind: to support the Katz School’s involvement in the university’s anti-Semitic Hate Speech Research Initiative, and to provide Katz School students with research opportunities using market-relevant tools, such as graphical databases, natural language processing and consensus algorithms to reduce bias in labeling.

Facebook and YouTube algorithms increase ad revenue by serving up content that amplifies biases toward certain classes of people that can lead to radicalization and polarization. Catlin said that he and Brandon Chiazza, who teaches a course on Information Architecture at Katz, want to develop a methodology that social media platforms will adopt to flag accounts trafficking in anti-Semitic hate speech.

The project will build on work that Chiazza began in his course several years ago. He oversaw an effort by data analytics students who designed an intelligent system identifying and indexing hate speech on the web. The team, which included Jacob Goodman, Qihua Zhu and Jeeho Bae, combed through an online database, called Hatebase, which provides a taxonomy or encyclopedia of hate terminology, to search for hate terms in Twitter feeds and FBI hate-crime public databases.

Their analysis focused on when hate terminology was used, when the meaning of a term was ambiguous, and various languages in which the terminology was considered hateful. They found that nearly 65 percent of hate terms referred to race, religion or ethnicity and 28 percent referred to sexual orientation and gender.

Machine learning models take samples of labeled text to produce a classifier that detects hate speech based on labels annotated by content reviewers. The idea is that complex algorithms using natural language processing will flag racist, violent or anti-Semitic speech faster and better than human beings possibly can.

Doing this effectively is more urgent than ever. Anti-Semitic incidents have shown a sharp rise in the United States. The Anti-Defamation League, a New York-based Jewish civil rights group that has been tracking cases since 1979, found that there were 2,717 incidents in 2021. This represents an increase of 34 percent over 2020.

Catlin said studies have shown there’s a strong correlation between incidences of hate speech and hate crimes. “We could make the world a less toxic place and hopefully a safer place by having a high-quality database that’s widely available,” he said.

What is considered offensive depends a lot on social context. Terms that are slurs when used in some settings may not be in others, but algorithms and the content moderators who grade the test data that teaches these algorithms how to do their job don’t usually know the context of the comments they’re reviewing. Catlin and Chiazza hope their model will tackle this issue.

“We hope that if we make people more aware of hate speech, there’ll be a reduction in anti-Semitic hate crimes,” said Catlin. “We want to create a hate speech index that makes YU a leader in this area.”