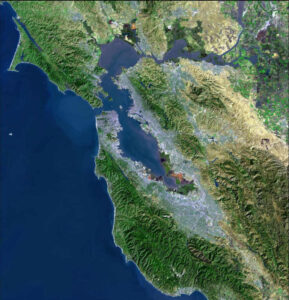 A student analysis found that the San Francisco Bay Area may be at risk of devastating wildfire by 2050.

As part of the course Geospatial Time Series Analysis, Surbhi Nayak, a student in the Katz School’s M.S. in Data Analytics and Visualization program, led a team that collected 20 years of satellite temperature data for S&P Global, a publicly traded firm based in Manhattan.

The team focused their analysis on areas in Northern California that have been affected by wildfire, with the goal of applying a digital lens to low-resolution forecasts of climate models. The forecasts are important for managing corporate assets.

The students then wrote an algorithm, which is a sequence of instructions for a computer to perform a series of computations, that aggregated the data they plugged into their model, turning low-resolution predictions of climate models into high-resolution images.

“We couldn’t have done that if the data we collected, cleaned, analyzed and manipulated wasn’t robust,” said Bilal Jamil.

Dr. Yuri Katz, the Katz School faculty member who advised the students and senior director of data science at S&P Global Market Intelligence, said his company is interested in assessing the rising risk of climate-induced flooding or wildfire.

“The Katz students were fantastic,” said Dr. Katz. “With their help, we increased the geospatial resolution of climate change projections.”

The Earth is already 1.1 degrees Celsius hotter than before the industrial age. Scientists estimate that several critical planetary systems are at risk of breaking beyond repair even if nations restrain warming to 1.5 degrees Celsius, the lower threshold stipulated by the Paris Agreement.

In response to the threat, companies are increasingly disclosing the specific financial impacts they could face as the planet warms, such as extreme weather that could disrupt their supply chains or stricter climate regulations that could hurt the value of their investments. Early estimates suggest that trillions of dollars may be at stake.

Nayak said machine learning is good at taking in large amounts of information, then sorting through it, classifying it and “learning” to detect—and predict—patterns with minimal human intervention.

The student model, according to Dr. Katz, takes “ground truth” of satellite data from 2000 to 2020 and utilizes computer vision algorithms to produce enhanced images of climate projections up to the end of the century. The enhanced images revealed, for example, that the San Francisco Bay Area will be at risk of devastating wildfire by 2050.

“The students have done compelling preliminary work in this area,” said Andy Catlin, director of the M.S. in Data Analytics and Visualization. “They provided the data for a small area for one key variable—temperature—but they also provided in the software the ability to extend it for other parameters, like precipitation.”