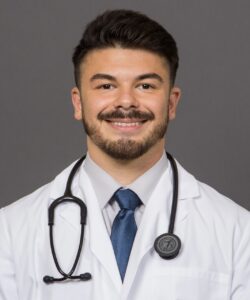 Anthony Pagan watched the patient’s chest rise and fall as he prepared to assist the surgeon at the operating table, the noxious scent of burning flesh filling the air as a cauterizing instrument sliced through tissue.

The surgeon made four incisions, and then it was Pagan’s turn. A second-year student in the Katz School’s M.S. in Physician Assistant Studies program, Pagan inserted a thoracoscope, a flexible tube with a light and tiny camera, into the patient’s chest that transmitted images of a cancerous lung on a video monitor.

Over the next couple of hours, he guided the surgeon through the procedure by keeping the camera centered on the scalpel, as the latter cut through a web of arteries and veins, a challenging if not nerve-racking task for Pagan because the camera’s controls move inversely to the movement of the camera.

“It was like directing a scene in a movie,” said Pagan, who was completing an internship at Good Samaritan Hospital on Long Island, “but in this case, I got only one take.”

In this case, the cancerous upper lobe, the size of an iPhone, was successfully removed in no small part because of Pagan’s assistance. He had read up on the procedure ahead of time to anticipate the surgeon’s moves.

“If they have to tell you what to do, they get a little irritated,” said Pagan, who was responsible for the patient’s postoperative management plan. “But most are very nice.”

During his rotation at Good Samaritan Hospital, a level-two trauma center, Pagan was in general surgery, assisting with whipple procedures, laparoscopic gastric bypasses, appendectomies, bypasses for diseased leg arteries above the knee, mastectomies, thyroidectomies, and more. He manually held open, or retracted, tissue as surgery was performed.

“It’s like holding the flashlight for Dad while he’s working on the car,” he said. “It was a unique experience for me that I really appreciated.”

PAs complete thousands of hours of medical training to become versatile and collaborative clinicians. They practice nationwide, improving patient access to high-quality health care in medical and surgical settings. They are also among the highest-paid professionals in the country. In 2021, the profession was ranked the Best Job Overall and Best Healthcare Job by U.S. News & World Report.

In their second year, students apply the skills and concepts they learned in their first year in a range of clinical settings. Like Pagan, each student rotates through eight five-week core disciplines and two five-week electives at clinical sites throughout the New York area.

“Anthony’s outstanding contribution to the PA profession and patient care as a student are a reflection of the high standards held by the Katz School’s PA program,” said Sharon Verity, clinical associate professor and director of the program.

“The curriculum immerses you completely in what you’re learning,” said Pagan. “You get to see the same thing from so many different angles at the same time, so it’s almost impossible not to retain information.”

He said he has learned a tremendous amount from Professor Verity because she teaches as if students are in the emergency room with her as she instructs them about patients with specific illnesses.

“She teaches medicine the way you practice it, by weaving together ideas from seemingly disconnected threads,” said Pagan. “From my experience in the hospital, that’s the way it’s done.”