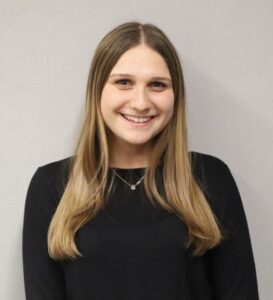 Anne, a 50-something churchgoer, lost her speech after a stroke. She had trouble coming up with the right words and stringing them into sentences—a condition called aphasia—until Dani Weingarten, a graduate of the Katz School’s M.S. in Speech-Language Pathology (SLP), took on her case.

Anne was a client at New York Neurogenic Speech-Language Pathology where Weingarten works as a speech pathologist alongside her mentor, Dr. Marissa Barrera, the owner of the practice and director of Katz School’s SLP program.

“When I first met her, Anne couldn’t say her name,” said Weingarten, who also teaches at YU’s Stern College for Women. “She couldn’t express how she was feeling.”

Over Zoom calls, Weingarten used standard speech therapy techniques, like reviewing colors, numbers and days of the week with corresponding visuals. With the use of a whiteboard, she helped her client piece together short phrases but they sounded robotic, and complex verbal communication remained elusive.

She sometimes left our sessions very sad,” said Weingarten. “It was frustrating for her.”

Then one day, she asked Anne to sing.

“She had lost the ability to read, write and speak—everything, except singing,” said Weingarten. 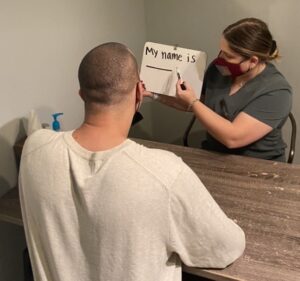 Weingarten works with a client at New York Neurogenic SLP.

The therapy engages the right hemisphere, which is used in understanding language as well as processing melodies and rhythms, by asking patients to tap out rhythms and repeat simple melodies. Weingarten, who learned of the therapy in the Katz School’s SLP program, created sing-song sentences for Anne. She then worked on removing the melody to leave behind a more normal speaking pattern. It was the key to retraining Anne’s brain to speak with tone and rhythm.

“We started with multisyllabic words and then would add a tune,” said Weingarten. “If she couldn’t find the word church, she’d sing me a song from her church that was completely intelligible and understandable. We’ve developed our own form of communication.”

Throughout the painstaking therapy, Weingarten has kept her mother and brother in mind. As a child growing up in Bayside, Queens, she witnessed her brother, who suffers from severe epilepsy, take frequent trips to the hospital. When she was 9 years old, she saw her mother go deaf. Napkins and pieces of paper were Weingarten’s primary means of communication with her.

“When I work with a client, I always try to see it from the sister’s point of view or the daughter’s point of view,” she said. “You want your loved one to have someone dedicated to them at all times, so I think, ‘How would I want mine to be treated?’ That’s how I approach my work.”

She also credits Katz School SLP faculty with instilling in her the discipline to get through the rigorous 55-credit program, which focuses on the medical aspects of SLP. Students participate in four clinical externships, learn how to conduct telehealth sessions and gain clinical experience under the guidance of faculty, supervisors and mentors.

Within the coursework, students utilize technology, such as endoscopy, electrical stimulation and ultrasound, to assist with the diagnosis of voice, speech and swallowing disorders. They also obtain the necessary counseling skills to support families facing a challenging diagnosis.

Passion is another hallmark of the program. Weingarten said the faculty routinely spent off-hours with her on classwork or just to offer encouragement.

“They supported and believed in me,” she said, “but they didn’t spoon-feed me. They were tough in all the right ways—and dedicated.”

More than a year after their first session, Anne speaks haltingly and in clipped sentences, but she can express when she’s happy or sad or in pain—a significant improvement over the few garbled words that constituted her vocabulary and often had her feeling overwhelmed.

“Now, she cries happy tears,” said Weingarten who recently received an email from Anne thanking her. “She said ‘I love you’. We used to end our sessions with her singing the song, Never Would Have Made It (Without You). Now she just says it to me.”