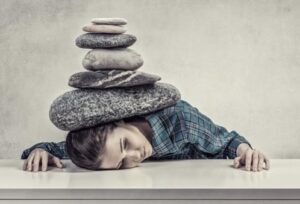 Fatigue, commonly called MS lassitude, can affect a patient’s perception  of their own cognitive abilities. courtesy of MS Foundation

Fatigue plays a significant role in how people with Multiple Sclerosis and their clinicians perceive and identify cognitive difficulties, according to a recently published paper co-authored by Dr. Marissa Barrera, assistant dean of health sciences and director of the Katz School’s M.S. in Speech-Language Pathology.

“Fatigue is hard for healthcare providers to measure and understand its effect on someone with MS throughout the day,” said Dr. Barrera. “What we’re trying to explore is their perception of how fatigue affects them and the reality of it on cognitive performance measures.”

With Multiple Sclerosis (MS), a person’s immune system goes awry and attacks the fatty sleeves surrounding the nerves in the brain and spine. Symptoms include numbness in the extremities, spasticity and visual changes. Moreover, MS is characterized by episodes of unusual neurological symptoms that come and go, usually lasting days or weeks. Still, there are different forms of the disorder, and they can vary widely in symptom intensity and rate of progression.

MS also causes cognitive impairment, including difficulty with memory, processing speed and executive functioning. Approximately 40% to 65% of people with MS show varying degrees and combinations of cognitive impairment on neuropsychological assessments. Fatigue and depression are commonly reported symptoms and have been shown to significantly impact an MS patient’s daily functioning and quality of life.

In the study, 202 patients with MS, ranging in age from 20 to 88 and 71% female, were asked if they had trouble with their memory as a result of MS. Clinicians were asked whether they believed their patient had a problem with memory due to MS. A computerized cognitive screening battery, called NeuroTrax, then assessed patients’ cognitive functioning by testing their memory (verbal and nonverbal), executive function, visual-spatial and verbal proficiency, ability to pay attention, information processing speed and motor skills.

The researchers found that patients’ accuracy in detecting attention deficits was “low,” while clinicians’ accuracy in detecting global cognitive impairment and a number of specific domain deficits was “moderate.” For patients, fatigue was a significant factor in how they perceived their own cognitive performance, while clinicians evaluated their patients’ performance through multiple factors, including cognitive scores, physical disability, age and depression.

“Cognitive deficits continue to be underreported and undiagnosed in people with MS because doctors and practitioners are often more focused on mobility and disease management,” said Dr. Barrera. “Cognition, language and swallowing are in critical need of more attention.”

The researchers said that incorporating screening tests for cognitive impairment should be part of routine care. Early detection would provide multiple opportunities to compensate for, stabilize or improve cognitive impairment, while also addressing its emotional consequences, that would improve a patient’s quality of life.

Dr. Barrera said that the ultimate purpose of the research is to improve bedside interactions for people with MS. Faculty and students in the Katz School’s Occupational Therapy Doctorate program will be joining her and her colleagues in later rounds of the research and will continue to explore how clinicians can better identify and help patients manage cognitive change.

“The longer we can keep people with MS happy, healthy and working,” said Dr. Barrera, “the better for them and society.”