Library’s website will be down New books from our faculty

New book from our faculty 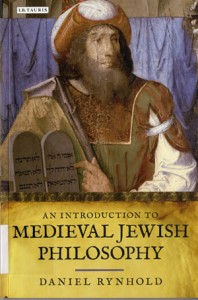 A couple of months ago Prof. Daniel Rynhold’s latest book, An introduction to medieval Jewish philosophy, came off the press. Rabbi Moshe Schapiro, Librarian at the Mendel Gottesman Library, had this to say about the new publication:

Medieval Jewish philosophy is a difficult area of study to penetrate. Obscure terminology and conceptual frameworks that are rooted in Greek, Arabic and Hebrew sources can lead to confusion and misunderstanding. That is why Dr. Daniel Rynhold’s An Introduction to medieval Jewish Philosophy is such a worthwhile endeavor. Dr. Rynhold surveys the approaches of the greatest figures of medieval Jewish philosophy to some of the most fundamental topics of philosophy and theology. He explains the background, assumptions and orientations of each philosophical approach in an organized, lucid and interesting manner. This book will give perspective and clarity to those who have already dabbled in Jewish philosophy as well as provide orientation and direction to the new student.

One Response to New book from our faculty