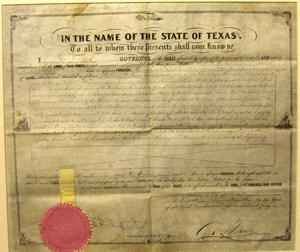 Did you know that Jacob de Cordova, a Jew born in Kingston, Jamaica in 1808, was a Texan pioneer?  De Cordova settled in the Republic of Texas in 1837 and by 1848 ran one of the largest land agencies  in Texas, which had become a state in 1845. A gift of rare Americana, recently donated to the library by Dr. Ronald Rubin,  includes a deed signed by the governor of Texas, George T. Wood, granting a vast tract of land near Austin to Jacob de Cordova.

The  donation also includes large bound  volumes of newspapers from New York and New England, chiefly from the early 19th century.  The collection is especially rich in newspapers documenting the War of 1812. A particularly rare document is the  black-bordered issue of the New-York Spectator from July 18, 1804, with a detailed description of the funeral of Alexander Hamilton, who was fatally shot in a duel with Aaron Burr. Hamilton’s last residence, Hamilton Grange, is currently located on 141st St. in St. Nicholas Park, not far from the Wilf Campus.

Dr. Ronald Rubin is a professor of political science at CUNY, a noted collector of antiquarian Americana, and the author of several books and numerous articles.