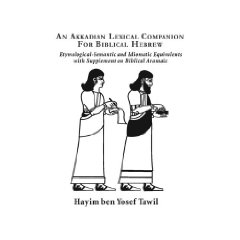 An Akkadian Lexical Companion for Biblical Hebrew : Etymological-Semantic and Idiomatic Equivalents with Supplement on Biblical  Aramaic, by Hayim Tawil. KTAV Publishing House, 2009.
Prof. Hayim Tawil’s An Akkadian Lexical Companion for Biblical Hebrew is the fruit of many years of intensive effort. In this book, which will serve as an essential reference tool in the fields of Biblical studies and Semitic languages, Dr. Tawil provides etymological equivalents between Biblical Hebrew and Akkadian, as well as semantic and idiomatic relationships between words in the two languages. Thus, hundreds of Biblical words and idioms are offered new meanings in context through examination of the Akkadian in similar usage.

It is the richness of extant Akkadian literature and hence vocabulary which enabled Prof. Tawil, on the basis of previous scholarly work, to build his “Lexical Companion.”  The reader may expect virtually every page to provide some fresh perspectives on Biblical words or expressions, some previously obscure and others now newly interpreted. 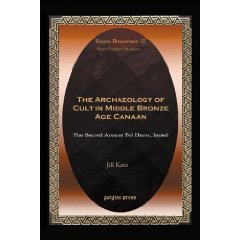 The Archaeology of Cult in Middle Bronze Age Canaan is Dr. Jill Katz’s book-form publication of her doctoral dissertation. In it she reviews different theories on the origins of ancient religions and cultic practices and develops a series of archaeological correlates to determine how to evaluate and draw conclusions from archaeological evidence. She then tests these correlates against the findings of archaeological investigations in Tel Haror and thirteen other Middle Bronze Age sites in Canaan. At the end she includes maps of the sites, graphs of collected data and pictures of representative types of artifacts.