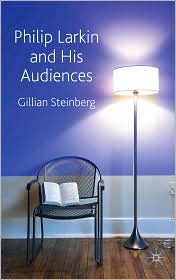 Philip Larkin and His Audiences, by Gillian Steinberg. Palgrave-Macmillan, 2010.

In Prof. Steinberg’s new monograph on poet Philip Larkin, she examines how Larkin’s approaches to such topics as memory, religion, and jazz were informed by his awareness of his reading audience. Steinberg argues that by examining the poet’s treatment of his audience, one can better grasp the tensions between the Larkin’s persona, the voices of his poetry, and his complex relationship to modernity. Steinberg’s own voice is at once familiar and authoritative, making her analysis of this poet’s numerous contradictions an enjoyable read.