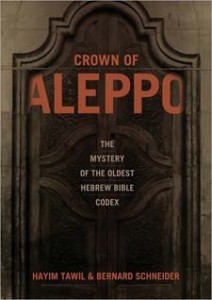 Dr. Hayim Tawil, Professor at Yeshiva College, collaborated with Bernard Schneider, an attorney with an interest in the Hebrew Bible, to tell the story of the Aleppo Codex, the oldest and most authoritative Hebrew Bible manuscript in book form, from its inception in ninth century Tiberias, through its wanderings from Eretz Israel to Egypt and from there to Aleppo in Syria in the late 14th or 15th century. There it remained, the prized possession of the Jewish community of Aleppo, until it was damaged in the anti-Jewish riots of 1947. It miraculously survived the fire and devastation in the great Synagogue where it was housed and was eventually smuggled out of Syria and brought to Israel. In addition to telling the adventurous history of the Codex in a clear yet exciting manner, the book also provides an account of its writing and significance and offers reasonable speculation as to the fate of the parts of the Codex which have been missing since the 1947 fire. A wealth of rare photos and documents, together with detailed footnotes and a useful index enhance the value of the book.