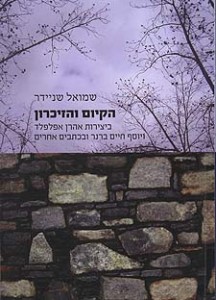 ha-Kiyum veha-Zikaron is the recently published volume by Dr. Samuel Schneider, Associate Professor of Hebrew and Head of the Dept. of Hebrew Language and Literature at Yeshiva College. In it he collects his contributions from the 1970’s and on to the periodicals Bitzaron and Hadoar. They mainly relate to the interaction between Jewish existence and tradition in the writings of Aharon Appelfeld, Baruch Kurzweil and Yosef Hayyim Brenner. One of the important themes which run through the book is the centrality of Jewish collective memory in the wrtitngs of Appelfeld and Brenner, in an affirmative sense in the former but in a negative sense in the latter. It is certainly advantageous to now have conveniently accessible in one volume so many of Prof. Schneider’s valuable essays.