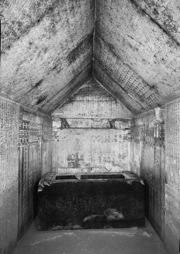 In Prof. Richard Steiner’s recently published monograph readers will find a scholarly presentation of a remarkable discovery which he made a number of years ago. A colleague sent him an enigmatic Egyptian hieroglyphic text asking whether any of it could be Semitic. Prof. Steiner realized that embedded in this text dating back to the 3rd millennium BCE was by far the earliest attested Semitic writing, specifically in proto-Canaanite, an archaic form of what later developed into Phoenician, Hebrew, Moabite and Ammonite. The surrounding Egyptian text consists of spells for the protection from the predation of serpents of the entombed mummy of the Pharaoh Unas which were written on the walls of his pyramid. The Semitic text fits right in, as it also contains serpent spells sent by the priests of Byblos, a city in present-day Lebanon, to Egypt.  In a 2007 lecture in which Prof. Steiner announced his discovery, he explained that the Semitic text demonstrated that proto-Canaanite already existed as a distinct language in early to mid 3rd millennium BCE and concluded that “the practice of writing Semitic texts with Egyptian hieroglyphs began long before the appearance of texts written in the Semitic alphabet.  Indeed, there may well be some connection between the two types of texts, since it is generally assumed that the invention of the alphabet was strongly influenced by the Egyptian writing system… This assumption is strengthened by the discovery that our spells, like later Semitic texts, are written mainly with monoconsonantal signs, which constitute an alphabet-like subset of the system.”