New Books From Our Faculty 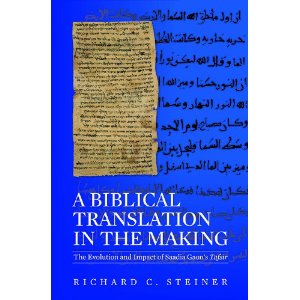 A Biblical Translation in the Making : the Evolution and Impact of Saadia Gaon’s Tafsir, by Richard C. Steiner. Harvard University Center for Jewish Studies, 2010.

R. Saadia Gaon (882-942), one of the greatest Jewish sages of the Middle Ages, composed a translation of the Torah into Arabic, which forms the subject of Prof. Steiner’s new book.  Prof. Steiner notes in his introduction that, in addition to providing a translation much needed by the Jewish public, R. Saadia specifically aimed it “to defend Rabbinic Judaism against two young, aggressive rivals: Islam and Karaism.  A translation ‘that would not be refuted by speculative knowledge’ would undermine the claim of Muslim polemicists that the Jews were anthropomorphist falsifiers of Scripture.  A translation ‘that would not… be rebutted by tradition’ would be useful in inoculating children against the claims of Karaite polemicists.”  Among the important questions Prof. Steiner seeks to answer are: 1. Where and when did R. Saadia Gaon work on his translation? and 2. What are the distinctive new features of his translation?  In answering the first question, Prof. Steiner shows that R. Saadia had already prepared an annotated translation while he was a student in Tiberias, that he later expanded it into a commentary, and that, finally, for the public’s convenience, he reissued the translation on its own.  In answering the second question, Prof. Steiner points out that R. Saadia’s work filled the need for a translation which would adhere to the tenets of both traditional Judaism and contemporary philosophy, while at the same time would follow the rules and niceties of Arabic grammar and style.  Thus, R. Saadia Gaon’s translation successfully met the objections raised by Muslim and Karaite polemics against previous Jewish translations of the Torah into Arabic.

One Response to New Books From Our Faculty