New Books From our Faculty 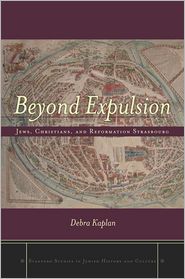 This book represents a study of the Jewish influence in Strasbourg in the Middle Ages and the early modern era.   All Jews were expelled from Strasbourg in 1390, and were only readmitted in 1791. Yet the Jews retained an influence on the city and maintained relationships in the city. Prof.  Kaplan details how this was possible.  Standard belief has it that once Jews were expelled from a community their influence there ceased. However, as Prof. Kaplan points out, the Jews often regrouped in neighboring rural communities and exerted an influence on the city that had banned them through economic, social and legal means. This was the case in Strasbourg. The Jews continued to trade in the city, and even developed social relationships with Christians.  At times they litigated in the same courts. Prof. Kaplan analyzes and studies the continued Jewish influence in Strasbourg despite the lack of a Jewish community there.   By using archival and other sources Prof. Kaplan demonstrates the fairly active Jewish participation in the early modern society of Strasbourg and the impact of the Reformation on the Jewish community. She shows how, by the end of the 16th century , the new Lutheran orthodoxy in Strasbourg  was seeking to curtail Jewish involvement  with Christians in the economic, social and intellectual life of Strasbourg.  Prof. Kaplan devotes chapters to Christian Hebraism in Strasbourg and the impact of the Reformation on Jewish writing and Jewish memory.  Prof.  Kaplan paints a portrait of a Jewish presence in Strasbourg without actual Jews, similar to various modern places where we find anti-Semitism without any Jews.  Prof. Kaplan’s work is a major addition to the study of Jewish – Christian relations in the Reformation period.