Opening the Gates of Interpretation 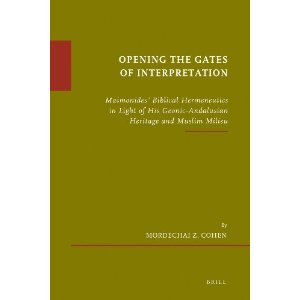 Opening the Gates of Interpretation: Maimonides’ Biblical Hermeneutics in Light of His Geonic-Andlusian Heritage and Muslim Milieu, by Mordechai Z. Cohen. Brill, 2011.

Prof. Mordechai Cohen’s study of Maimonides’ method of biblical interpretation has at its heart an exacting analysis of each passage in Maimonides’ Book of the Commandments in which the term peshuto shel mikra appears. According to Prof. Cohen, Maimonides developed a systematic theory relating law and biblical interpretation, in which a mitzvah cannot be counted as one of the 613 biblical commandments without an anchor in peshuto shel mikra. To explore this premise, Prof. Cohen considers the definition of the term “peshat” in various eras and locales, from medieval Ashkenaz to Geonic Andalusia to the modern day. The book offers a wide-ranging tour of texts as diverse as the poetry of Song of Songs and halakhic passages in Leviticus, and of fields that vary from Islamic jurisprudence to literary theory. Prof. Cohen’s scholarly erudition, lucid writing and devotion to his subject engage and inform the reader. His study is an important contribution to the fields of Jewish intellectual history and biblical interpretation.
Posted by Moshe Schapiro.