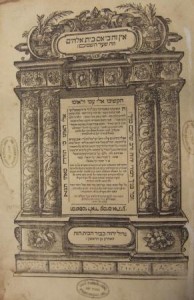 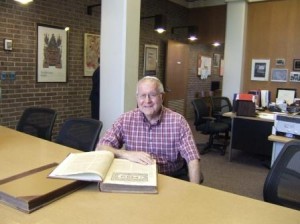 Dr. Ronald Rubin, already a generous donor of rare volumes to the Library’s Special Collections, presented the Mendel Gottesman Library with a very valuable set of four magnificent volumes this week, in celebration of his birthday, the Biblia Rabbinica (Mikra’ot Gedolot), published in Basel in 1618-1619. This edition, the 6th Biblia Rabbinica, was commissioned by the Christian Hebraist, Johannes Buxtorf the elder, and published by his son-in-law, Ludwig Konig. This four volume set is particularly rare since it includes a special separate section for the Haftarot,  not found in most editions.
Buxtorf and Konig hired Abraham Braunschweig, Elia ben Jehuda Ulm, and Mordechai Gumplin, Jewish printing experts to set text and proofread the volumes.  These Jews obtained special permission from the government to live in Basel during the course of the printing, however their sojourn there was not without incident.  Buxtorf and Konig attended the bris of Braunschweig’s son, and were each fined 100 gulden. Braunschweig was fined 400 gulden, and all the Jews who were visiting Basel for the event were briefly jailed, and expelled from Basel after their release.