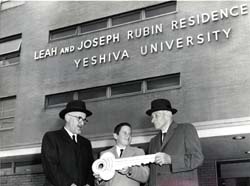 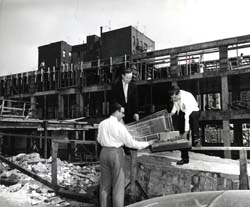 Rubin Hall is molting, shedding its skin for a new, 21st century, energy efficient upgrade.
The cornerstone laying for the seven-story dormitory took place fifty-six years ago on June 10, 1956. YU’s Public Relations Department, headed by Sam Hartstein, issued a steady stream of communications on the progress of the construction. On February 21, 1957, Dr. Immanuel Jakobovits, then Chief Rabbi of Ireland, affixed the first mezuzah to a doorpost of the nearly completed new residence hall. Two scrolls took places of honor at the building’s initial dedication on May 26, 1957: a scroll in a mezuzah mounted by Senator Jacob Javits, and a parchment scroll in commemoration of the event, written by scribe Rabbi Murray Grauer, and placed in an earthen jar that was buried during the dedication ceremonies. Following the dedication, a dinner with a couvert of $7.50 per person was held in the new dining room, in honor of thirty-two donors who had contributed $6,000 or more to the building.
The new dormitory was blessed to have a second dedication on November 8, 1959, when it was formally named the Leah and Joseph Rubin Residence Hall. William B. and Cele H. Rubin and a Rubin family fund provided significant support for the building, whose construction was originally funded by a loan from the Federal Housing and Home Finance Co. Joseph Rubin, founder of a box manufacturing company he established in 1887, was privileged to attend the dedication at the age of 93. His son, William, was also active in the box company, as well being the president of the Rockwood Chocolate Company and the Tootsie-Roll company. Both men were also founders of the Albert Einstein College of Medicine. Who knew boxes of chocolate could provide a solid foundation for a building?