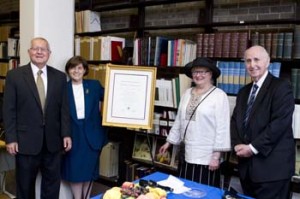 Yeshiva University honored Professor Ronald Rubin YUHSB ‘57 on June 26th at YU Libraries, in a special reception organized in recognition and appreciation of his many gifts to YU in recent years, including his gifts to the Mendel Gottesman Library’s rare collections. At the reception, Prof. Rubin received a framed certificate marking and commemorating his contributions to YU.
Among his most recent gifts to the YU Libraries are: a beautifully-bound, four volume Biblia Rabbinica (Mikra’ot Gedolot, 6th ed.) published in Basel in 1618-1619 and commissioned by the Christian Hebraist Johannes Buxtorf.
Professor Rubin officially donated the Biblia Hebraica back in April, in honor of a significant birthday he was celebrating. He first became a patron of the YU Libraries four years ago, when he began contributing rare items for its collections. These items include a series of bound volumes of American newspapers from the early 1800’s; and a deed signed by former Texas governor George T. Wood, granting a tract of land near Austin to Jacob de Cordova, a Jew who settled in the Republic of Texas in 1837 and, by 1848, ran one of the largest land agencies in Texas. He has also donated to RIETS and recently dedicated a room in the Jacob and Dreizel Glueck Center.
Professor Rubin is a professor of political science at the City University of New York’s Borough of Manhattan Community College; a noted antiquarian Americana collector; and the prolific author of several books and many articles in academic journals and newspapers. A search of the YULIS catalog yields more than 50 entries for gift items from Professor Rubin, and represents over 100 volumes in the Rare Book room.
At the ceremony, Pearl Berger, Dean of YU Libraries, declared, “What I find most heartwarming in Professor Rubin’s approach is his concern for our students and his regard for what YU represents. Whenever he brings us books, Professor Rubin mentions that he hopes they will be of interest to our students. His goal is not simply to collect rarities or to fill shelves in our Rare Book Room, but rather, to enhance the education we offer by providing primary source materials and antiquarian publications that will pique students’ interest.”
Upon accepting the award from YU Vice President University Affairs, Rabbi Dr. Herbert Dobrinsky, Prof. Rubin spoke and noted his lifelong commitment to and belief in the ideals that YU stands for. It was noted that an anthology of Prof. Rubin’s published works that focus on issues affecting Israel or world Jewry and those that discuss Judaism will appear in the next few months with the title: A Jewish Professor’s Political punditry: Fifty Plus Years of Published Commentary by Ron Rubin.

One Response to Reception for Prof. Ronald Rubin