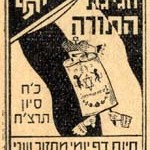 The concept of Daf Yomi, the daily study by Jews all over the world of the same daf or blatt [2 pages] of Talmud, was instituted at the suggestion of R’ Meir Shapira, founder of Yeshivas Chachme Lublin, at the Agudath Israel Kenesiyah Gedolah (Great Congress) in Vienna in 1923. Yeshiva University Archives holds materials from Yeshivas Chachme Lublin, and from the second Siyum HaShas (completion of the Talmud study cycle) in its Central Relief Committee Collection (CRC).  A press release from 1938, issued by Yeshivas Chachme Lublin in honor of the second Siyum HaShas notes that the Talmud was divided into leaves when it was first printed in the 16th century.  The entire Talmud comprises 2702 leaves, thus learning a daf of Gemara a day enables the completion of the entire Shas in seven and a half years.  (CRC 227/3). Later, Masechet Shekalim in the Talmud Yerushalmi was added to the cycle, increasing the number of leaves to 2,711.

R’ Shapira viewed the study of the same blatt of Gemara all over the world as a way to literally put all Jews on the same page.  Wherever a Jew would travel, he would be able to join the local community and study the daily daf.  It would unite Jews in study of the oral Torah, as the weekly Parshat ha-Shavua, the weekly Torah reading portion, does for the written Torah.  And, as with the annual Torah reading cycle, when the Talmud is completed every seven and a half years, the learning begins anew. It is interesting to note that the length of the Talmud daf yomi study is the approximate length of a shemitah cycle (Sabbatical cycle), which culminated with a public Torah reading.

The inauguration  of the international  Talmud study day was set for Rosh Hashana 1923, beginning with Masechet Brachot, and the first Siyum HaShas, called the “siyum ha-gadol” (great siyum)  at the time, took place on Tu Bishvat, 1931.

In a pamphlet, ha-Yotser ve-yetsirato by Meier Wolf Niestepower, published in Przemysl, in 1937, (CRC 227/2), R’ Shapira described that on his journey to the founding meeting of Agudath Israel in Kattowitz in 1912, he wondered how Jews from all over the world, with diverse outlooks – such as R’ Hayyim of Brisk who wants to see Jews completely immersed in halacha, and R’ Yaakov Rosenheim of Frankfurt in Western Europe who has a different philosophy, and a religious Jew in materialistic America and a pious Jew from the holy city of Safed – will be able to unite in Agudath Israel?  R’ Shapira found the answer when he studied a page of Gemara and commentaries.  The Mishna was created in the Land of Israel, the Gemara in Babylon, Rashi in Ashkenaz, Tosafot in France  –  yet they all join to discuss the same question, on the same page of Talmud.  Thus, he concluded, Agudath Israel will serve as a thread of solidarity for all Jews, all over the world.  This observation evolved into the concept of the study of Daf Yomi, the universal daily shiur for Jews the world over – a symbol of Jewish unity. 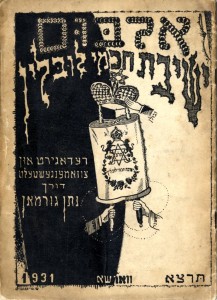 Another major Torah initiative launched at the Agudath Israel Kenesiyah Gedolah in 1923 was also the brainchild of R’ Meir Shapira – the founding of a major yeshiva, Yeshivas Chachme Lublin (Poland), a Hassidic oriented counterpart to the great Lithuanian yeshivot.  The plan was for an impressive, modern, building with classrooms, a library, and dormitories and eating facilities for the students.  The cornerstone was laid on Lag ba-omer, May 22, 1924, but R’ Shapira spent many long years traveling around the world raising funds for the yeshiva before opening ceremonies were held on 28-29 Sivan (June 24-25) 1930. 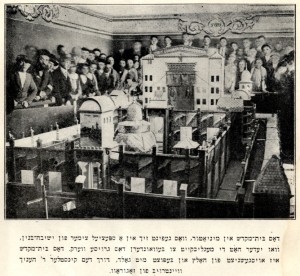 In 1926, R’ Shapira was in the United States, and as reported in the New York Yiddish newspapers, the Tog and the Morgen Zhurnal, he presented a shiur at the Rabbi Isaac Elchanan Theological Seminary, on the subject of “the sanctity of the Mikdash.”  The topic was especially fitting, since later a special room was designated at Yeshivas Chachme Lublin to house Henoch Weintraub’s model of the Bet ha-Mikdash.

The study of the Daf Yomi, and Yeshivas Chachme Lublin were deeply intertwined in R’ Meir Shapira’s vision. Yeshivas Chachme Lublin’s flag portrayed the hands of Yissochor holding a Torah scroll, while the hand of Zevulun coronates the scroll with the crown of Torah.  Those who study Torah – Yissochor – and those who support the study of Torah – Zevulun – work hand in hand and complete one another. The flag was black and white, symbolizing a black fire on a white fire, a reference to the Torah and to the flags of Yissochor and Zevulun.  R’ Shapira proposed a “daily groshen” where every person who learned the set daily Talmud portion would donate a groshen to Yeshivas Chachme Lublin. Those who learn would also help teach, by supporting the yeshiva, and thus study would become an integral part of an individual’s connection and responsibility to the community.  This was, perhaps, in keeping with the yeshiva’s flag, which joined the concepts of Yissochor and Zevulun. 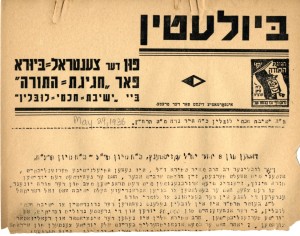 The Daf Yomi program was immediately adopted with great enthusiasm by the religious Jewish world.  The 1938 Yeshivas Chachme Lublin press release cites a letter from R’ Shapira, who wrote that while traveling on behalf of the yeshiva, he didn’t see a community of Jews anywhere who didn’t know about Daf Yomi.  Travelers reported from far corners of the world, Cuba, Morocco, Egypt, South Africa, Central America, and so on, that they met Jews learning Daf Yomi.  And a reporter for the New York Tog said that in his trip to Russia, in Birobidzhan, he met a Jew who was studying the daf of the day. 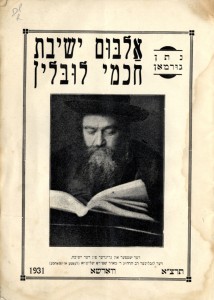 R’ Shapira, the Lubliner Rav, died of typhus in 1933 at the age of 46. He did not live to see the second Siyum HaShas.  It was celebrated on 28 Sivan, June 27, 1938, and was called the “Hagigat ha-Torah” (celebration of the Torah).  28 Sivan 1938, was the anniversary of the day that Yeshivas Chachme Lublin had opened eight years earlier, and was also the day a Sefer Torah, written in the name of all Jews, was completed at Yeshivas Chachme Lublin.  The second Siyum HaShas was celebrated internationally.  A 1938 press release reported that a special hour for the Hagigat ha-Torah would be reserved on the radio station of the city of New York on 28 Sivan, June 27. In this hour the Shas would be completed by learning the final daf of Masechet Nidah, the hadran would be recited, and the meaning of the day would be stressed with speeches by R’ Silver, honorary president of the Agudath ha-Rabanim of America, R’ Dr. Jung, as well as R’ Baumol, vice-president of the Agudath ha-Rabanim of America.  The speeches would be in Yiddish and transmitted on several radio stations in other American cities. (CRC 227/3).

R’ Meir Shapira, a builder of Agudath Israel, and its representative in the Polish parliament, could not have foreseen the destruction of European Jewry by the Nazis, which began not long after the celebration of the second Siyum HaShas. The yeshiva building survived the Nazi onslaught, and served after World War II as a medical school. The building has been returned to the Jewish community and is currently being restored. The twelfth Siyum HaShas will be celebrated there. The yeshiva’s flag has been revived, though this time on a background of red and white, the colors of the Polish flag. The flag itself may be viewed at:
http://www.crwflags.com/fotw/images/p/pl_jwlub.gif and with additional explanatory material at: http://www.crwflags.com/fotw/flags/pl-jews.html

This week, a hundred years after the Agudath Israel was founded in Kattowitz, the Jewish world will celebrate the twelfth Siyum HaShas under its auspices.  Despite the near-complete destruction of European Jewry during WWII, the study of Daf Yomi has survived the war and grown stronger, with an increasing number of attendees at every Siyum HaShas.   R’ Meir Shapira’s vision of a cycle of Talmud study has indeed united Jews all over the world, and fulfilled his hope that not only will Jews keep and learn Torah, but that Torah study will help keep and maintain the Jewish people.