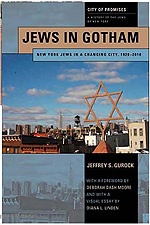 In the last 30 years we have been witness to a plethora of Jewish community histories in the US.  Many fine studies have been published about small and medium-sized American Jewish communities.
Yet a lacuna in the field of American Jewish history was a serious history of the Jewish community of New York City, which, at any given time in Jewish history since the Civil War, has by far been the largest and most important Jewish city in the United States.
The last such history, by Dr. Hyman Grinstein of the Bernard Revel School of Yeshiva University — “The Rise of the Jewish Community of New York, 1654-1860”– was published in 1945 and did not deal with the period after the mass immigration of East European Jewry after 1881. The new 3-volume history entitled City of Promises, published by New York University Press, covers the period of 1654-2010.
The 3rd volume of the series, called “Jews in Gotham : New York Jews in a Changing City, 1920-2010” was authored by Dr. Jeffrey S. Gurock, a faculty member at BRGS of Yeshiva University and a noted expert on American Jewish History, particularly in terms of Orthodox Judaism. Gurock has authored many previous books on American Jewish history, including a history of Yeshiva University.
This volume covers many important areas in Jewish life in New York City. Chapters are dedicated to discussions of such issues as Jews and leftist ideology, which took serious hold during the Depression, orthodoxy in NYC, and the building of institutions of Jewish learning. There is also discussion of the role of the NY Jewish community during the Holocaust years, and its contributions to the political, intellectual, and economic life of New York City. A particularly interesting chapter discusses Jewish activism in New York in regards to Soviet Jewry and Jewish renewal.
Bringing it up to date, Dr. Gurock discusses Black-Jewish tensions, and the impact recent mayors, such as John V. Lindsay, David Dinkins and Rudy Giuliani, had on Jewish life in New York.
In essence this volume covers New York Jewry at its height (1914-1945) at a time when Yiddish influenced New York English, when Jewish cuisine, like bagels and knishes, became the unofficial food of New York, and when Jews dominated  the music and literary scene of NY, through the period of the late 1960’s, when  many of the City’s Jews moved to the suburbs or to the Sun belt states, and the City’s Jewish population decreased , which resulted in a marked decrease in the “Jewishness” of Gotham. Ironically enough, this period saw the election of the 1st Jewish mayor of New York City, Abe Beame. Gurock then traces the period of recovery, beginning in the late 1980’s, under a Jewish mayor, Ed Koch, and a renewed robust Orthodox population.
This volume offers not only facts but a serious analysis of the course of Jewish history in New York. It is footnoted with a fine bibliography and includes a visual essay by Diana Linden.