YUFind Saves You Time Pennsylvania Journal and the Weekly Advertiser

Yeshiva University Archives recently acquired a photograph of the Alumni Banquet of the Beth Midrash LeMorim, held on March 7, 1926. Rabbi Dr. Bernard Revel, President and Rosh Yeshiva, is standing in the background, surrounded by the staff and graduates.  Despite the formality of the setting, the dinner in the photo took place only a week after Purim.  1926 was the height of Prohibition, and the festive bottles on the tables are probably malt, a near-beer beverage permitted under the Volstead Act.
The Beth Midrash LeMorim, or Teachers Institute, as the school was known in English, was originally founded by the Mizrachi in 1917. It became part of RIETS in the early 1920s. Teachers Institute eventually became one of the Jewish Studies programs at Yeshiva College, initially called Erna Michael College and currently the Isaac Breuer College of Hebraic Studies. 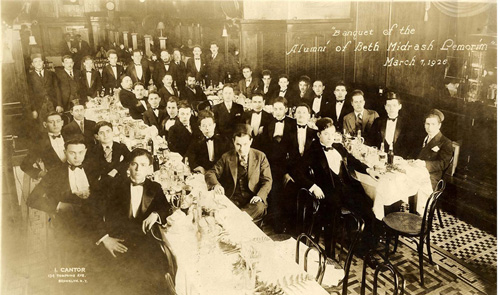