DATABASE IN FOCUS: BIBLIOGRAPHY OF THE HEBREW BOOK Nathan Birnbaum and Jewish Modernity. 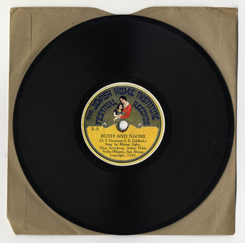 This year, the holiday of Shavuot falls adjacent to Mother’s Day, a fitting tribute to Naomi and Ruth, matriarchs of the lineage of King David.

A century ago, in the United States, Jewish educators emphasized the connection of mothers and children in the cycle of Jewish continuity. The Bureau of Jewish Education established the Jewish Home Institute in New York City, which supplied mothers with material for preschool education at home. The Institute’s logo, an image of a mother and daughter, appeared on its recordings. The record shown here is for Shavuot, with the song “Ruth and Naomi” on one side, and “The Pilgrimage” on the other. You can listen to “The Pilgrimage,” a song about bringing bikurim to the Temple in Jerusalem.

Dated by today’s standards, this technology was cutting edge in 1928, and employed modern pedagogical methods. Popular singer Arthur Fields (born Abe Finkelstein), sang the song by Samuel Grossman and Samuel Goldfarb, colleagues of pioneering Jewish educator Samson Benderly. The duo is best known for the American Jewish classic, “I have a little dreydl, I made it out of clay.”

The recording is held by the Yeshiva University Archives, among the Rabbi Herbert S. Goldstein papers, and was recently digitized.