The Challenge of Received Tradition Solomon Schechter: A postcard from Cairo 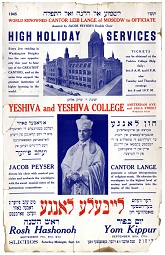 Cantor Leib Lange, known as the “Muscover” hazan, officiated at High Holiday services at Yeshiva in 1945.  Cantor Lange, a native of the Ukraine, studied at the Odessa Conservatory, and moved from Moscow to the United States in 1933. The patriotic red, white, and blue color scheme of the publicity poster may have been influenced by the imminent end of World War II.

Cantor Lange’s leadership of the prayer services must have been compelling, since he was invited back in 1949, when his contract specified that “the services to be rendered by the Cantor… are to be performed in an artistic manner and to the best of the ability of the Cantor. The Cantor hereby guarantees that the said services will be as inspiring and impressive as is humanly possible.”

The poster and contract are in the Yeshiva University Archives.