The Intellectual History and Rabbinic Culture of Medieval Ashkenaz 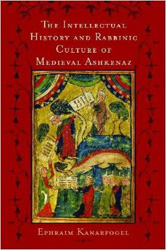 The Intellectual History and Rabbinic Culture of Medieval Ashkenaz, By Ephraim Kanarfogel, Wayne State University Press, 2013 was awarded the Goldstein-Goren prize for Best Book in Jewish Thought, by the International Center for Jewish Thought at Ben-Gurion University.

For years the assumption of many scholars of Medieval Jewish history was that the Ashkenazic rabbis of the twelfth and thirteenth centuries were almost exclusively focused on Talmud and Halacha in contradistinction to their counterparts in Sephardic lands.  This led scholars “to ignore or downplay” the extra-talmudic disciplines within the Medieval Ashkenazic world. Prof.  Ephraim Kanarfogel’s book demonstrates that there were actually wide-ranging and multifaceted intellectual developments within Ashkenaz during this period.  In his analysis of the French and German Tosafists, Kanarfogel highlights the disciplines of biblical exegesis, philosophy, mysticism and poetry.

Rabbi Dr. Kanarfogel is the founding and current director of the Rebecca Ivry Department of Jewish Studies at Stern College for Women and the E. Billi Ivry University Professor of Jewish History, Literature and Law.