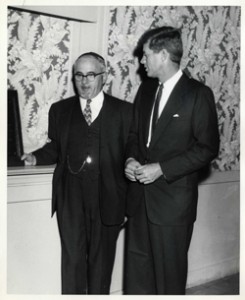 John F. Kennedy (1917-1963) was the 35th President of the United States, the youngest person and only Catholic to be elected to that office to date.  While still a Senator from Massachusetts, he met with Dr. Samuel Belkin, president of Yeshiva University, at a dinner celebrating the opening of the Albert Einstein College of Medicine in 1955, and he received the University Award at the Yeshiva University Charter Day Dinner in 1957. Kennedy’s speech upon receiving the Award addressed the “…question of whether the national interest suffers from or is benefited by the relationship between our public policy and ethnic and religious group ties…”  “In short, American freedom is not threatened by American pluralism – it depends on it.”  You may listen to the speech or read a transcript. 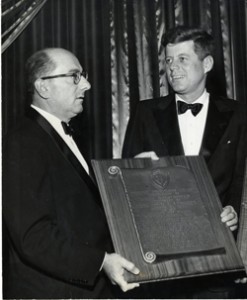 Kennedy was assassinated in Dallas, Texas, on November 22, 1963.  Dr. Belkin sent a telegram of condolence to the White House, and delivered an address, “Profile of Courage” a tribute to John F. Kennedy, at a special convocation of the Albert Einstein College of Medicine on December 1, 1963.

The extended Kennedy family continues its connection with Yeshiva University.  The Rose F. Kennedy University Center for Excellence in Developmental Disabilities at Einstein, established in the 1960s, just embarked on a new initiative, a clinical research program to investigate the causes and possible treatments for its patients’ conditions. Congressman Patrick J. Kennedy was the honoree and keynote speaker at the Ferkauf Graduate School of Psychology’s 55th Anniversary Gala in 2012.