“Why No Matzohs?” Dr. Jacob Birnbaum and the Soviet Jewry Movement The Tragedy of a Generation

May 1958-A Newspaper is Born at Stern College 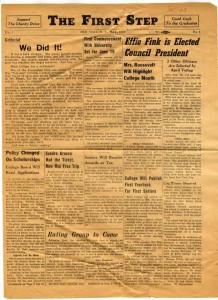 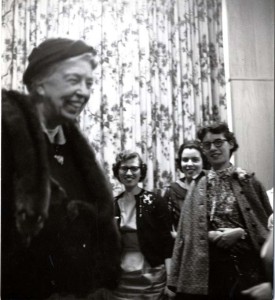 May 1958 was a month of “firsts” at four-year-old Stern College.   The inaugural issue of the First Step, the College’s fledgling journalistic endeavor, was published.  The paper reported on Stern’s first graduating class of twenty-six students, Eleanor Roosevelt’s “Stern College Month” fireside chat on the future role of women in society, the Middle States evaluation, and even the library’s new microfilm machine.  The paper had its light side:  the creators of the Purim play described its origin: “’if the boys uptown can write satires of school life, why, so could we.’” And in a time before cell phones, a column entitled “Suspense Reigns on Monday Night Until the Telephone Rings” depicted life around the sole telephone in the dormitory.