The Tragedy of a Generation 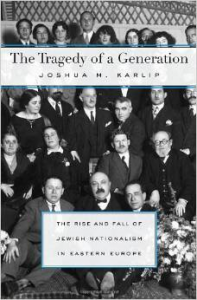 The Tragedy of a Generation : the Rise and Fall of Jewish Nationalism in Eastern Europe, by Joshua M. Karlip. Harvard University Press, 2013.

This book explores a serious attempt at an alternate, non-religious expression of Jewish identity that took place in the last 150 years.

Today the chief forms of communal Jewish identity are either a religious expression through Judaism or identification with the State of Israel, by living there or by supporting the Zionist enterprise.  In the mid-nineteenth century the largest settlement of Jews in the world, Czarist Russia, was marked by attempts at new forms of Jewish identity.  Some Jews sought assimilation and still others acculturation in the general culture.  But the vast majority of Jews leaving the traditional religious community sought more Jewish expressions, such as Zionism, Jewish socialism (the Bund), and the subject of this volume – Jewish cultural and territorial autonomy, also known as Diaspora Nationalism.

The author explores various attempts at Jewish autonomy in Russia and later in Poland. Such attempts were marked by a desire for either cultural autonomy through the official status of the Yiddish language or for territorial autonomy by the creation of a specific autonomous Jewish region other than Palestine. In most cases, efforts at territorial autonomy interfaced with the efforts at cultural autonomy. Dr. Karlip analyzes these attempts at Jewish autonomy through the work and thought of three major representatives of the movement, namely Elias Tcherikower, Zelig Kalmanovitch and Yisroel Efroikin.

Although for a time after World War One it appeared that the movement of Diaspora Nationalism had an optimistic future, it soon fell apart.   Following the end of the First World War Jewish cultural autonomy found a place in the new Baltic republics of Lithuania and Latvia with autonomous Jewish schools, teachers’ colleges, media and theaters. Yiddish was regarded as an official language in these areas. In the case of Latvia, a Lubavitcher Chasid, Mordecai Dubin, became the virtual dictator of “Jewish autonomy”. The short-lived independent Republic of the Ukraine offered Jewish cultural and political autonomy, but the victory of the Red army put this to an end.

The most famous and most tragic attempt at cultural and territorial autonomy was in the USSR. There for a period of about 10 years (1923-1933) Jewish cultural autonomy was implemented in White Russia, the Ukraine and other regions with a large Yiddish speaking population. Yiddish schools functioned and a vast Yiddish literature received government support. In Siberia Stalin even created a Jewish autonomous region, Birobidzhan, with Yiddish as its official language. All of these were doomed to failure.
In Poland and the Baltic Republics Diaspora Nationalism failed because it could not attract the degree of support that Zionism, orthodoxy and socialism did among the Jewish masses. The masses saw Zionism and religion as well as socialism as the solution to the “Jewish problem”.

Dr. Karlip does an excellent job at distinguishing the various strains in cultural autonomy and Jewish nationalism, and at describing the internal rivalries and relationships with other Jewish political movements. He uses his vast knowledge of Yiddish and of East European Jewry to shed new light on a unique moment in Jewish culture and life. This is an informative and fascinating study of a movement that now exists only in the pages of history.